History of Ryukyus between 1972 and present 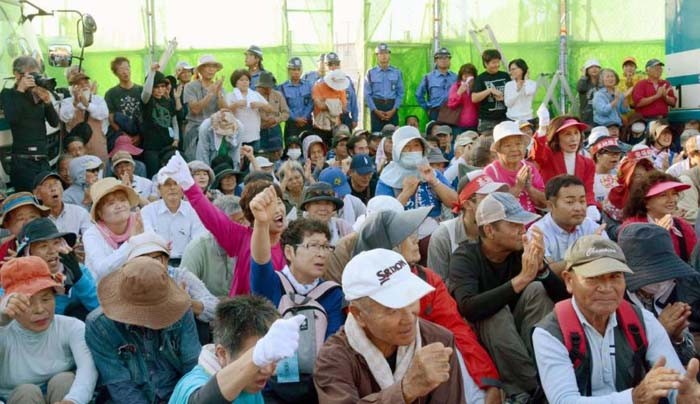 People in northern Okinawa have protested against U.S. military installations in the area continuously over 10 years, first against the construction of helipads in Takae, and then expanded against the Henoko replacement plan for MCAS Futenma.

In 1879 Japan destroyed and abolished the Ryukyu Kingdom. Japanese military forces suddenly surrounded the Shuri Castle, and King Sho Tai who had refused to give up his independent Kingdom was arrested and taken to Tokyo. Instead of continuing to use the kingdom’s name “Ryukyu,” Japan started using “Okinawa,” the name of the largest island of the Ryukyus, as the new name of the 47th prefecture.

After Japan lost the war against the U.S. and its allied powers, the U.S. military government reverted to using the name of the former kingdom, as in the “United States Civil Administration of the Ryukyu Islands” (USCAR) and the Government of the Ryukyu Islands (GRI). When the islands were returned to Japan in 1972, Japan again stopped using the name “Ryukyu” and returned the use of “Okinawa” to mean the entire prefecture. 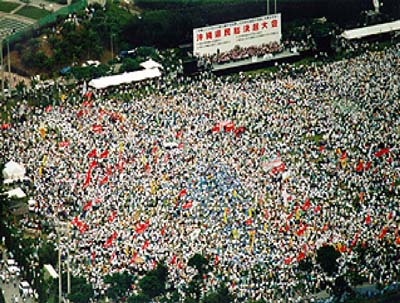 Before the Satsuma invasion in 1609, the island people had been totally independent. No foreign nations intervened in the internal political or economic affairs of the Ryukyu Kingdom, and its people were ambitious, self-determined, and dignified. They became prosperous by engaging in international trade with neighboring Asian and Pacific nations. They also enjoyed peace and longevity.

Immediately after 1879, independence movements surfaced, but they were ignored and suppressed. Foreign invaders took away the independence and self-determination from the native people, and still today are acting as if they had been the masters and owners of the Ryukyu Islands.

The reversion of the Ryukyus to Japan took place, and had the support of local people, for the following reasons. 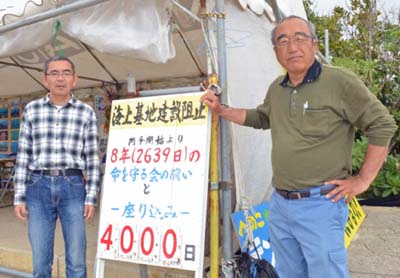 Protesters in Henoko show a billboard stating their 4000th day of protest.

Second, people wanted to get rid of American control and the heavy concentration of U.S. military bases, and third, to become free from U.S.-military-related crimes, accidents, environmental pollution, and other problems. And fourth, to increase monthly wages for higher standard of living under the Japanese ‘mighty’ yen economy.

Including the author of “Okinawa, the History of an Island People,” George H. Kerr, many American intellectuals and political leaders thought that the Okinawans had basically been peace-loving people, and that they would follow and obey their oppressors. This theory and belief was totally reversed when 3,000 Okinawans joined in the anti-U.S. Koza Riots, setting on fire over 80 U.S.-plate cars and injuring more than 60 Americans.

In September 1995 three U.S. sailors raped a 12-year-old schoolgirl on her way back from shopping in the northern part of Okinawa. The Okinawa Prefectural Government immediately organized an ad hoc committee to oppose the U.S. military bases and demand the revision of the U.S.-Japan Status of Forces Agreement. 85,000 Okinawans and 3,000 off-islanders gathered to demonstrate against the U.S. military operations in Okinawa. The rally was held at Ginowan Seaside Park on Oct. 21, 1995. In addition, demonstrators have surrounded both the Kadena Air Base and MCAS Futenma by an unbroken human chain three times each up to now. 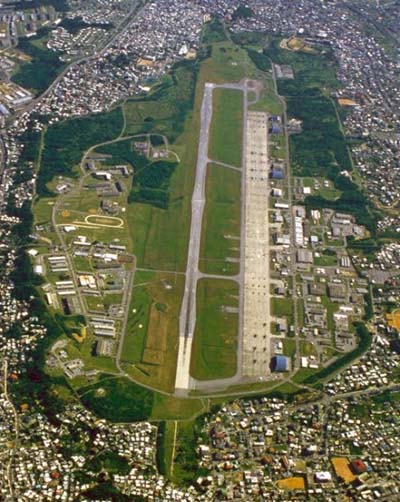 U.S. and Japan agreed to the relocation of MCAS Futenma, often called “the most dangerous airfield in the world,” over 20 years ago, but the agreement has yet to be implemented.

A U.S. military helicopter from MCAS Futenma crashed on Okinawa International University campus next to the base in 2004. The MCAS has been known as the world’s most dangerous airfield because of its location. Twenty years ago on Apr. 12th, 1996, Prime Minister Ryutaro Hashimoto and U.S. Ambassador Walter Mondale agreed to the return of the base. As nothing has happened, Okinawans began to distrust the U.S. and Japanese leaders who cannot carry out their agreement signed 20 years ago.

Both U.S. and Japanese governments claim that Henoko is the only option to relocate the MCAS Futenma. Okinawans strongly oppose this option because, first, the dangers of the base still remain on Okinawa, second, the military-related crimes, accidents, pollution and other problems will simply be transferred to Henoko, and third, Okinawa is still a military target for an “enemy” attack, if a war breaks.

The U.S.-Japan idea that “Henoko is the only option” is naïve and unrealistic, as far as the island people are concerned. Even the former U.S. ambassador to Japan, Michael Armacost, denied the idea of “Henoko’s the only option.” Armacost believes there are other options, according his interview with the Okinawa Times on Apr. 12th, 2016.

An American movie director, Oliver Stone, and the U.S. anti-war group, Veterans for Peace (VFP), participated in the protest against the Henoko base construction on Dec. 16th, 2015.

It’s not normal for an island with a land area of only 0.6% of Japan, to have 74% of all U.S. military base facilities in Japan concentrated. For 70 long years the island people have suffered of the heavy burden of the military installations.

Peaceful diplomacy will bring about a healthier and more sustainable world. It has been proven that the U.S. military engagements in China (1949), Korea (1950~’53), Vietnam, (1967~1975) and Western Asia (1991~ today) have not brought about “Peace and Stability” in the regions, as the U.S. and Japan have been advocating for many years. Instead, they have created a great deal of side effects, chaos and instability in the regions involved.

Global peace, security, and stability in a real sense do not come from military confrontation but from multi-national peaceful political and economic negotiations and collaboration.

In order to bring about lasting peace and stability in East Asia the following proposals have been made: 1) The U.S.-Japan-Korea Security Treaty be changed into the U.S.-Japan-Korea Peace and Friendship Treaty, 2) The U.S.-North Korea Armistice Treaty be changed into the U.S.-North Korea Peace and Friendship Treaty, so that the sea and air ports will be open for international commercial trade, and that science and technology can be exchanged, and that diplomats, students, scholars, athletes, artists, musicians, and more can mutually be exchanged.

If we do not make the effort and fail to prevent another major war, the whole world will have to suffer WWIII in the near future, as many nations already possess inter-continental ballistic missiles, which could be used accidentally or intentionally. The time has come now for us human beings to come closer in order to establish international rules and agreement in keeping all types of nuclear devices in order and under control.

Finally, the people of the Ryukyus whose self-determination has been taken away for 407 years (1609~2016) should voluntarily be given back their independence as soon as possible. All East Asian nations – the Koreas, China, and Japan have recovered their independence after WWII except for the Ryukyus that enjoyed its independence and self-determination for about 500 years until 1609. Humans have a moral responsibility to return what they have taken away by military force, just as we must return what we have stolen. We have no right to take away other people’s belongings or property and keep them against the will of the owners.

For 407 long years the Ryukyuan people’s independence and their self-determination has been denied and ignored; their lands and properties have been confiscated against the will of the owners of the lands. The Ryukyus will be the last remaining nation in East Asia to become independent in the near future.