Emi Meyer, a jazz pianist and singer songwriter is scheduled to have two concerts on Okinawa on Jun. 25 and 26. The concerts will be her first appearance on the island with the first concert at Sakurazaka Theater Hall A and the second at Garaman Hall at Ginoza Culture Center. 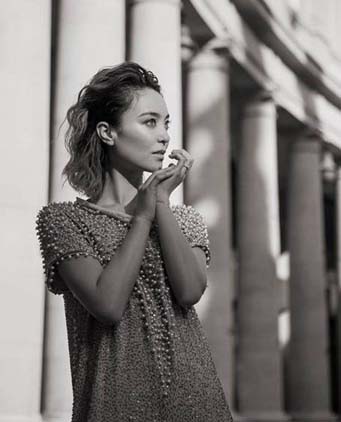 Meyer, whose mother is Japanese and father American was born in Kyoto, but her family moved to Seattle before she was one year old. She started learning classical music on piano at age six, and later became interested in jazz. Later she studied music in Los Angeles where her topics included Indian melodies, African drumming and Japanese court music.

She first lived in Japan when she took part in a study-abroad program in Kyoto in 2007. Her career in Japan started when she won the Seattle-Kobe Jazz Vocalist Competition. Last year she released a Jazz standard album titled “monochrome” that shot to the top of Jazz in iTunes.

When asked about her planned program for her first performances on Okinawa, she said, “I would be performing some Jazz standards and my original songs. I will also welcome requests on Twitter.”

Her performance at Sakurazaka Theater A-Hall starts at 19:00. The doors open 30 minutes earlier. Tickets to the concert are ¥3,000 in advance and ¥3,500 at door. An order of one drink (¥300) is required. No pre-school age children are allowed to the venue. Tickets are available at Sakurazaka Theater, tel. 098-860-9555 more information.

The concert on Sunday, Jun. 26, at Ginoza Culture Center Garaman Hall begins at 15:00 with doors opening an hour earlier. The tickets are ¥2,500 in advance plus ¥500 at door. Junior high and high school student tickets are ¥1,500 and ¥1,000 for elementary school students. Preschool children are not allowed to enter. Tickets are available at Garaman Hall and from their Japanese language website  or call 098-983-2613.