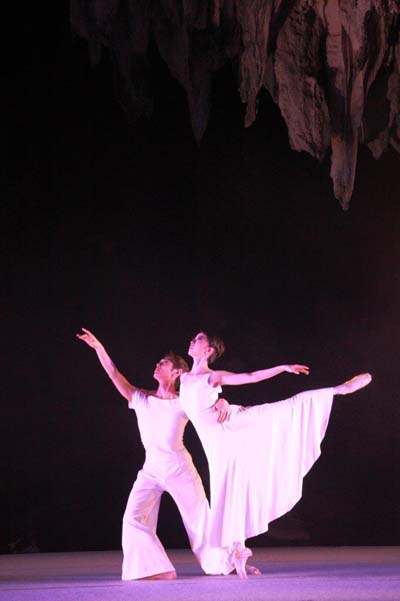 The cave forms a dramatic background to the performance.

Midorima’s first Tokoiriya production was performed in Tokyo and the second in Gangala Valley, and both were acclaimed as great successes. His performance is a mix of original and classic ballet with the essence of traditional Ryukyu dance. This is his third performance of Tokoiriya.

The show centers on prayer because Jun. 23rd is the Okinawan Memorial Day known as Irei-no-Hi, the day when the Battle of Okinawa ended with the two top Japanese general committing ritual suicides.

The centerpiece of the show is titled “Lumières de l’Est and Bolero,” which Midorima created as an oblation at Tenkawa Daibenzaiten-sha Shrine in Nara Prefecture, and is a typical Midorima-style mix of Ryukyu dance and ballet. In total, the show lasts about 90 minutes.

The venue of the show is especially interesting is the venue, as the stage is set in a limestone cave. His performance will match the universe, which is the theme of the main performance, against the mystique of the limestone cave that creates an atmosphere totally unlike a show in a theater. 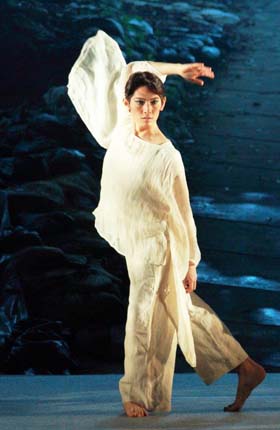 Midorima created the centerpiece of the show as an oblation at a shrine in Nara Prefecture.

Additionally, the patterns of the dancers’ attires are taken from print art pieces from the 17th century Ryukyu, which is one of the highlights of the performance.

Midorima performs two shows at Gangara Valley Cave Café on Jun. 25th and 26th. The doors open at 19:00 with the show starting at 19:30. The café is located across the street from Okinawa World theme park in Tamagusuku, Nanjo City.

Tickets to the show are available at FamilyMart e-plus, Co-op Apre, Ryubo Play Guide and on their English language website  or call 080-6487-5694 for more information.

Japan Update has one pair of S-tickets to the show on Jun. 25th. To participate in the raffle, visit Japan Update facebook page.