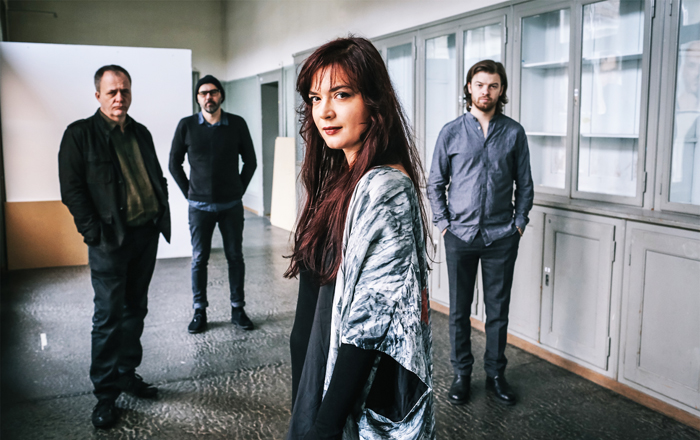 Over the past few years the Garaman Hall at the Ginoza Culture Center has gained a reputation of attracting a bevy of outstanding artists of every genre of music to perform on its stage.

A number of jazz performers that rarely, if ever, can be heard anywhere else on Okinawa have made the Garaman Hall a place that Jazz enthusiasts return time after time in order to listen to musicians that are outside of the traditional American style of players whose performances are more readily available to listen to.

Elina Duni Quartet is a collection of musicians who, in addition to Albanian born singer songwriter Alina Duni, includes Colin Vallon on piano, Patrice Moret on double bass and Norbert Pfammatter on drums. The quartet is scheduled to perform at Garaman Hall tomorrow at 19:30.

Elina Duni was born in Tirana, Albania, 1981, where she made her first public appearances on stage as a singer at the age of five on the national radio and Television. In 1992, after the communist regime of the country fell and she was 10 years old, her mother, a poet, moved to Geneva in Swizerland together with her where she studied piano and encountered jazz while at music school.

In 2004, she put together a jazz quartet carrying her name, and moved closer to her musical roots combining Balkan folk songs with her original pieces of jazz.

Her newest song “Dallendyshe” is about love and exile. She says, “My songs are of love and exile. Folksongs are always at the core like that. This song tells of all the men moving north, south, east and west, however, women are waiting for them. It describes hope, dreams not coming true, and reunions.”

She sings most of her songs in Albanian, and her voice makes them truly amazing even though very few in the audience are likely to know the language. She says, “I never wanted to be a singer backed by a trio. I consider my voice as one instrument in a quartet letting the other players to get inside my vocals, and experiment with it.”

Elina Duni Quartet concert at Garaman Hall starts this Friday at 19:30 with doors opening an hour earlier. Ticket are ¥3,000 in advance and ¥500 more at door. Student tickets are ¥1,500. Residents of Ginoza Village get an extra discount of ¥500.

Tickets are available by call 098-983-2613 (24 hours a day) or by email at ticket@ginoza-bunka.jp. When ordering, please write the name of the show, your name, phone number, and, how many tickets you want to buy. Advance tickets are available until midnight the day before the concert.