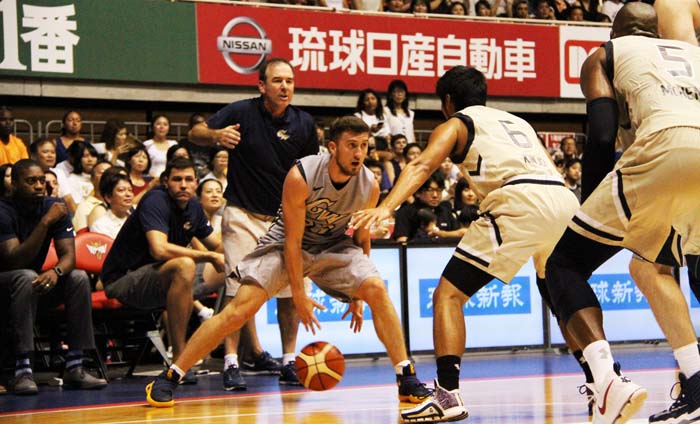 The George Washington University Basketball team, the Colonials, visited Japan to play a series of international friendship matches from Aug. 13 to 21. The squad played three games against the Japanese National team, and ended their Japan tour against the Ryukyu Golden Kings on Sunday. 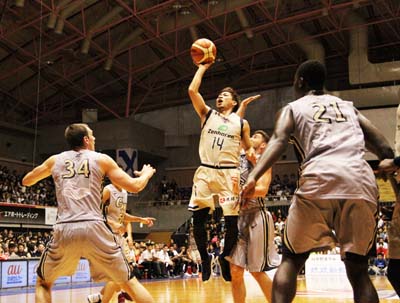 Ryuichi Kishimoto (#14) played well from the start of the game.

The final game of the series was on Okinawa against the Ryukyu Golden Kings, the champions of the last season of the bj-League, on Sunday at Okinawa City Gym, where the guests drubbed the hosts 82-56.

In the 1st quarter, Kishimoto and Tsuyama of the Kings worked well, but the rest of the team showed that they still have much work to do. The Kings had a lot of missed plays and the first quarter ended 11-17. 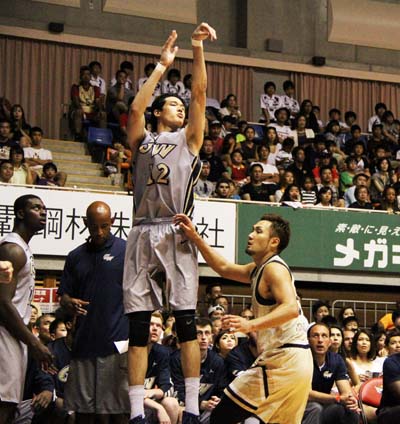 Yuta Watanabe, the Japanese member of the Colonials, said playing in Okinawa was exciting.

Then the gap between the teams only got wider at the end of the 2nd quarter when the number on the board were 40-28 for the Colonials.

During the last half of the game the Kings seemed to recover, but the Colonials still showed the home team how it’s done, and the game ended with 82-56.

Yuta Watanabe, a Japanese member of the Colonials showed some great play and powerful dunk shots in front of the Kings’ fans. After the game, Watanabe said, “It’s hard for me to play in Japan, but I appreciate this opportunity. I was especially so excited about a chance to play in Okinawa with such a cheering from fans and a great atmosphere in the venue.”

Kings’ captain Ryuichi Kishimoto said after the game, The Colonials did perfect work much more than us. They took rebounds well and grabbed loose balls correctly. It’s our usual task. We had a lot of misses and could not successfully execute our chances, but we will fix our challenges. This was a very good experience for us.” 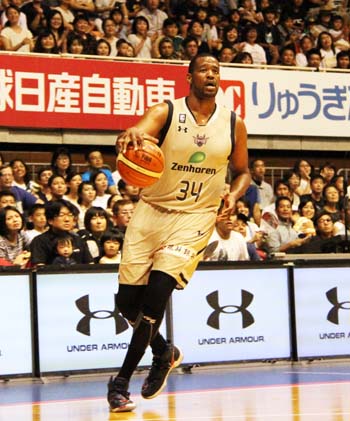 Lamont Hamilton played his first game as a member of the Golden Kngs.

Tsutomu Isa, the head coach of the Kings, observed that there was a big difference in the average height of the players compared to the Colonials. “But I believe we did a good game,” Isa said. “Of course, having such a big difference in the size of the players in most of the positions is not like playing against a Japanese team. We had to take into consideration this difference. We lost the game with a large margin, but there were some ways we could confirm we are good even against a big American team. Now we have to concentrate on improving the team further as we approach the start of the new B.League,”