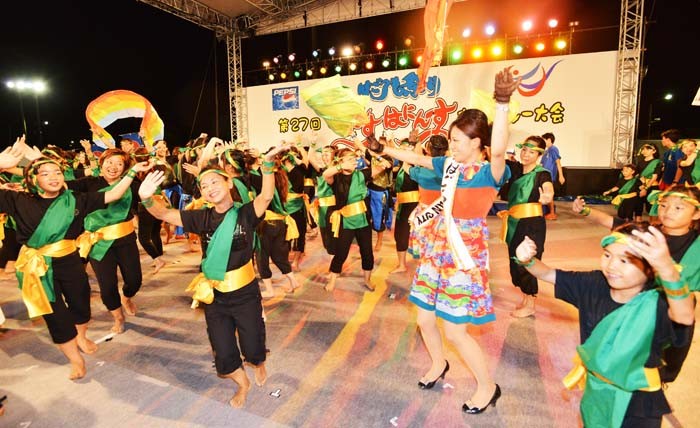 Sunday’s Hagoromo Festival’s  famous Kachashi Tournament is postponed to next Sunday because of inclement weather. The fireworks, water gun battle and other events scheduled for Sunday were also postponed.

As Moher Nature refused to cooperate and decided to send a massive thunder front to Okinawa on Sunday, organizers were forced to postpone Sunday part of the Ginowan Hagoromo Festival for a week. The water gun battle, kachashii contest, fireworks show and other programs scheduled to run Sunday at Ginowan Seaside Park next to the Okinawa Convention Center, will now take place on Aug. 14 at the same venue. 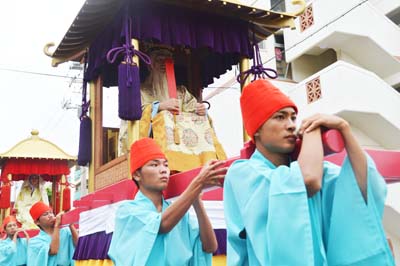 The festival opening ceremony is at 15:35 on Saturday, followed by a Ginowan youth group performance and children’s Eisa on stage. Live bands perform from 18:50 to 20:50. A popular historical parade, which has become one of Hagoromo Festival’s trademarks, proceeds from the Okinawan-styke gate in front of Ginowan Gym uphill towards Hwy 58 to a Kanehide supermarket from 17:00 to 20:00. The street will be closed for car traffic during the parade that depicts the famous Hagoromo Legend, and includes the “Walking Picture Scroll of King Satto,” a powerful 14th century Okinawan Lord who is said to have been the son of a farmer and a heavenly maiden, who’s the focus of the Legend of Hagoromo. In addition to the king and his entourage, hatagashira groups, Ginowan Junior Chamber of Commerce Eisa dancers, the ‘Hagoromo maiden’ and plenty of folks dressed in historical attire join in the parade.

Highlights on Sunday include a water gun contest starting at noon. The contest was included in the festival last year. Who would not like to play with water guns on a hot summer day, as getting a little wet is only a welcome relief.

The water gun battle has two categories, one for general public, and the other for elementary school-age children. Winners in both categories earn gift card prizes. 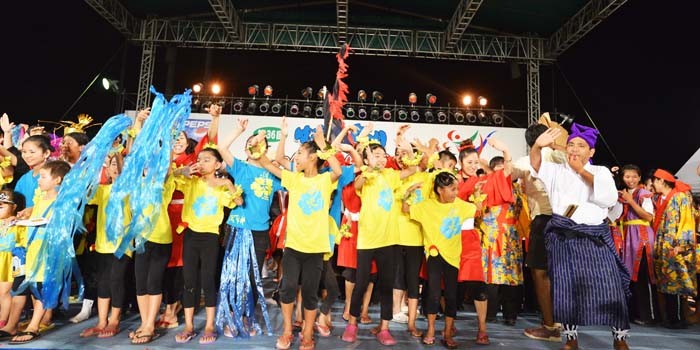 Everyone, participants and those in audience alike, is guaranteed to have a blast at the Kachashi competition.

Another highlight of Sunday is the Kachashi Dance Tournament that starts at 16:40. Anyone can take part in the contest, and both participants and spectators are guaranteed to have a great time. A free kachashi class is held starting 14:50 in front of the Ginowan Gym for those who need a little advice on the basics of this Okinawan tradition.

Over 70 individuals and groups showed their original dance last year, including men and women of all ages who delighted the crowds with their antics.

Fireworks will close the event both days starting 20:50.

As parking is very limited in the area organizers urge visitors to use public transportation.