Itoman Furusato Festival ends with a bang as 1500 fireworks are sent to the skies.

The northern side of the Itoman Fishing Port is the venue of the 28th Itoman Sea & Summer Festival on Aug. 20 and 21. On the same dates but on the southern side of the port, the Fishery Festival and Children’s job experience festival are in full swing making the weekend the largest festival of the year in the city. 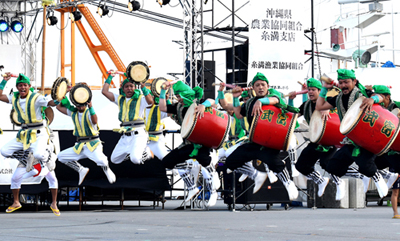 Itoman has several youth groups who perform Eisa that is very dynamic and physical as is befitting to a community that prides itself in its seafaring traditions.

At the Sea & Summer Festival first day, there are local traditional arts show and general citizen groups dance performances, a dance contest, drift performance, awamori Masahiro’s bottle dance meeting, in which the dancer balance a 1.8-liter awamori bottle on their heads and everyone is invited to participate, and live performance by Shakari, all culminating in a creation drama of “Festival of Itoman” starting at 20:00.

Second day, a traditional Chinese tai chi demonstration and Hawaiian dance show take place from 13:00 to 14:30. A 100-dance showcase is at 15:45 followed by an arm wrestling contest at 17:35, and Itoman youth Eisa group performance at 20:45. Sunday events also include a water gun fight, in which the participants compete for prizes worth ¥200,000. 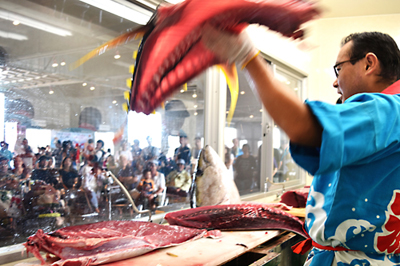 Tuna cutting show in Itoman is the best one can see on Okinawa.

Those who want to participate in Awamori Masahiro pot dance meeting or water gun fight should apply before festival on Itoman City homepage. The machine translated English on the homepage is a little difficult to understand, though.

The Itoman Fishery Festival focuses on the city’s long and rich traditions on fishing and seafaring. The festival runs from noon to 17:00 on Saturday and 10:00 to 16:00 on Sunday.

The fishery festival features a tuna cutting show and a seafood gourmet contest. A live fish catching contest starts at 16:00 on Saturday and 15:00 on Sunday, to which participants need to purchase tickets costing ¥300 that go for sale 15 minutes before the start.

Sunday events also include a day-long dragon boat festival that starts from 09:00. The races include a total purse of ¥700,000 for the winners.