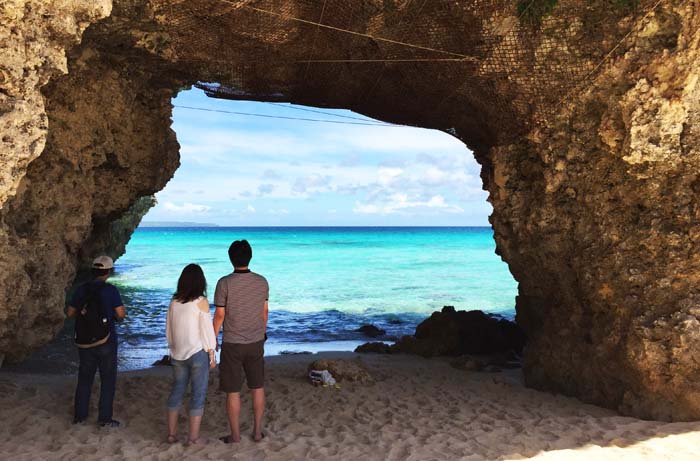 A natural tunnel leading to the ocean is the landmark of Sunayama Beach.

Miyako is the fourth largest island in the Ryukyu Island chain that forms Okinawa Prefecture, of which Okinawa main island is the largest, followed by Iriomote and Ishigaki Islands. 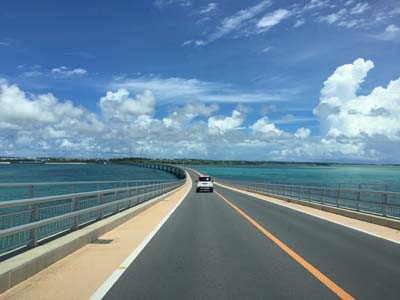 At 3,540 meters, Irabu Bridge is the longest toll-free bridge in Japan and Miyako’s newest tourist attraction.

Miyako-jima City, the sole municipality on Miyako was founded in 2005 when the five old municipalities of Hirara City, towns of Gusukube, Shimoji and Irabu, and Ueno Village were merged into one, Oct. 1st, 2005. 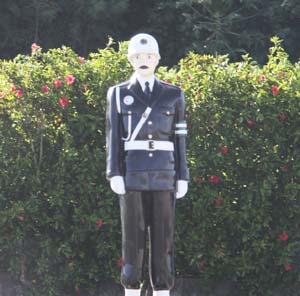 Because direct flights to Miyako from Kansai International Airport in Osaka and Haneda in Tokyo were opened in recent years, the number of tourists coming to Miyako has exploded. Especially, after the Irabu Bridge opened, it has become very hard to get flight tickets and accommodations on the island during peak seasons. But it’s also said that if you visit Miyako once, you will fall in love with the island and want to return again and again.

Emerald green oceans, bright white long beaches, warm fun-loving local people and green nature are all commonly attributed to the island’s charms. For such a tiny island it has an astonishing number of spots to see, and diving and swimming in the ocean is the best. Even people living on the main island of Okinawa are surprised for Miyako’s clear ocean and wonderful nature. We specially recommend a visit to the island at least once. 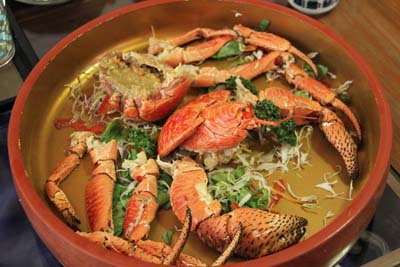 Coconut crab is a local delicacy.

Miyako Island is located at 290km southeast of Okinawa main island, and has an area of about 158.87 square kilometers. Most of the island is limestone, and it’s a very flat island. The highest hills are Nkyafusu and Nakao ridges, which rise to just 115 meters above the sea level. That’s why there are no major rivers on the island but there are rich springs, augmented by some man-made dam systems that ensure enough water for agriculture and people’s everyday life.

An interesting feature about Miyako Island is that it has no habu or other poisonous snakes. It’s generally believed that being a low-lying flat island, a big tsunami in the ancient past covered the island, and no habu survived. Locals also insist that even if someone tries to bring a habu to the island, it will soon die. It’s the only big island in the Ryukyu archipelago that has no habu. 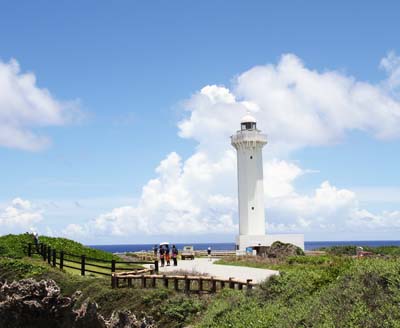 There’s another interesting specialty you are likely to encounter when you visit the island. There are more than a dozen life size police figures along the roads. People call the much beloved figurines ‘Miyakojima Mamoru-kun.’ Their job is to keep watch on the safe driving of the islanders. Some items related to Mamoru-kun, such as snacks and souvenirs, are sold on the island shops.

Coconut crab dishes and mango fruits are very popular among visitors to the island. Miyako mangoes are said to be the sweetest in Japan.

Otoori is a very special drinking custom of Miyako islanders, in which each person at a party gives a toast, and after the toast pours his cup full of awamori and offers it to every person in the party. Naturally, it’s expected that the recipient drinks the cup bottoms up. Then this cycle would be keep going on. That has given people on Okinawa main island an image of people from Miyako being strong for alcohol. I for one believe it’s true. It’s also trains people to be good speakers in front of people on any occasion. 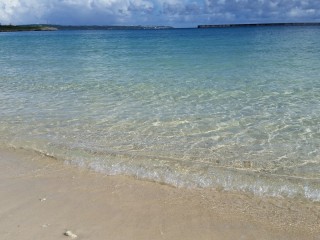 Painagama Beach is located near downtown Hirara . It’s a very local beach with many tourists and locals having fun. It has calm and clean waters, no high waves here, and as such, very safe. Some locals come to the beach to practice playing sanshin from early morning, and nighttime, too. Walking on the beach in the morning is refreshing, and mingling with the locals on the beach is very relaxing. 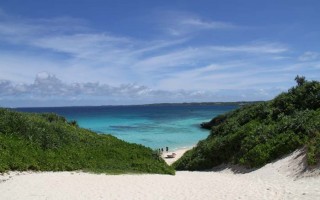 Sunayama Beach is one of the most beautiful beaches on Miyako, and has been picked to the Best Beach in Japan Award a couple of times. Before reaching the beach, you need to walk through some bush on a sand road for a short while, but once arriving at the top of the hill, an amazing view opens in front of your eyes and the greatest beach welcomes you! A tunnel through the rock by the beach is the trademark of the beach. Water off the beach is calm but at some spots it deepens immediately, so swimming kids must be kept on a close watch.

Nishi Hennazaki is the cape point located in the northern tip of Miyako Island. “Nishi” means “West” in Japanese, but the point is located in north. In Okinawan dialect ‘nishi’ means north, and that’s why the point called Nishi Hennnazaki. There’s an observatory on the highest spot of the point, from where one can see Ikema Bridge and Ikema Island. There are a few huge wind turbines on the side of the cape. 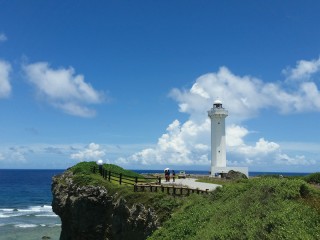 Higashi Hennazaki is also a great sightseeing point on Miyako Island. Higashi means east in Japanese, and the point is located at the easternmost spot of the island. The landmark of the point is a lighthouse. The contrast of the white colored lighthouse and clear, blue ocean and sky is amazing! One can climb up inside the lighthouse, and the view from the top is superb! 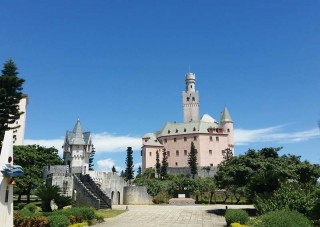 Ueno German Village is a theme park modeled after a German village. The story of the village goes back to 1873 when a German ship on the way from China to Australia ran aground off Miyako Island. Local people saw the ship to hit the reef and rescued the crew caring them very well. After the crew got back to Germany, the Kaiser Wilhelm II heard of the story, and sent a German navy ship to Miyako to set up a monument. Over 100 years later, Miyako built the German Village theme park that opened in 1996 near the spot the shipwreck had occurred 123 years earlier. 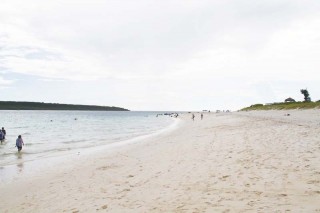 Maehama Beach, often called the most beautiful white beach in the Orient, is about 7 km long with shining white sand like powder. The beach offer various kinds of beach activities like banana boats, jetskis and much more. There are several beach shops including restaurants, food stands and stores selling beach goods. Especially, the sunrises and sunsets on the beach are gorgeous! The beach is the main venue of the Miyako Triathlon held in every April. 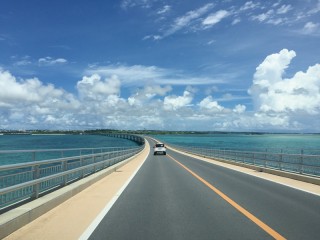 Irabu Island is located about 5km northwest from Miyako Island. Its area is 29.06 square-kilometers, the island is almost flat. The only way to access Irabu from Miyako was by ferry before the Irabu Bridge opened in 2015. After the bridge opened, the ferry services between the islands stopped. Also after the bridge opened, lots of tourists are coming to visit the island to see and drive the longest toll free bridge in Japan and admire the view of the clear blue ocean along the bridge. The surge in tourists has prompted many shops and restaurants to open on the island. 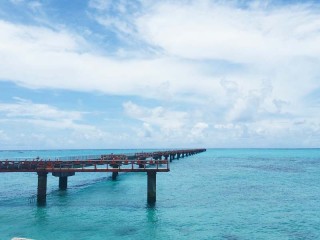 Shimoji Island is located next to Irabu, and most people don’t even notice they across the bridge between the islands. In the northern part of Shimoji Island, there is the Shimoji Airport which used to have commercial flights until 1994. After that it was used only as a training facility for airline pilots until 2014. After ANA and JAL left it’s used just for training small aircraft pilots. Although the airport is closed, driving outside offer some breathtaking views of the emerald-colored ocean. 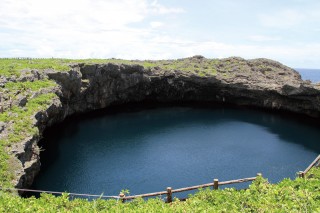 Tori-ike Sea Passage consists of two ponds next to each other and located on the northern part of Shimoji Island. One of the ponds is 75 meters in diameter and 45-meter deep, and the other is 55 in diameter and 25-meter deep. Seen from above they look to be two ponds side by side, but they are connected underground, and one is also connected to ocean. People call the ponds Tori-ike meaning sea passage. Because of the mystery, many divers come to dive the ponds. 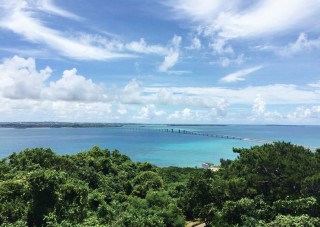