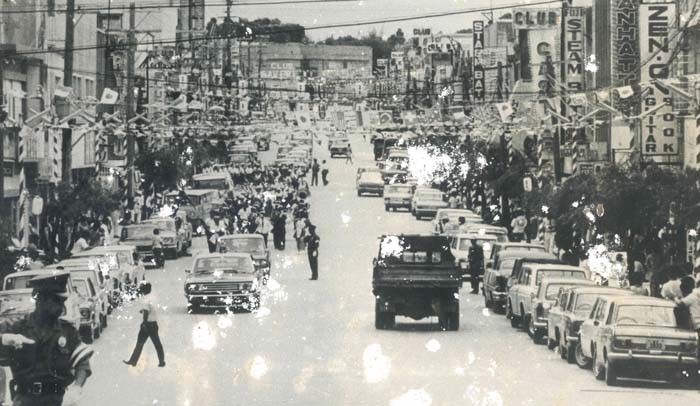 Today’s Chuo Park Avenue was this wide and busy in the 60’s.

Okinawa City prides itself as being the most multicultural community on Okinawa, and that face of the city is nowhere more visible than in the areas outside of Kadena Air Base Gate 2. English and Japanese signboards stand side by side on the main and side streets where restaurants serve a rich variety of cuisine from countries such as India, Mexico, Peru and Thailand.

Walking along the Gate 2 Street to Goya Crossing, one sees a big building standing out on the right where music events and performances by various kinds of musicians take place every week. It’s Koza Music Town, a symbol of Koza, which has long been regarded as the town of music.

At present, there’s no place with the name of Koza on the map. The town that earlier in time was called Koza is now a part of Okinawa City, which was created by merging of three area villages. Nevertheless, residents still call the place Koza.

Koza, the word itself is mysterious, neither English nor Japanese. The history of the town is also the history of Kadena Air Base. The Koja district used to be called Koza by American soldiers who set up Camp Koza, and confused Koja and Goya, and as a result, the area around Goya became known as Koza.

The construction of Kadena Air Base transformed the area into a developed city. Local residents started to open restaurants and amusement spots for American soldiers in order to make a living. In those days, because of sanitary conditions were rather questionable, many places were declared off-limits to military personnel unless they were inspected, and cleared to meet the sanitary standards of the U.S Armed Forces. Stores certified by the U.S officials hang up an approval sign, called A-sign. Whether an establishment was issued the A-sign or not became almost a matter of life or death to citizens dependent on the base economy, and the A-sign became a sort of status symbol.

However, there were many problems, culminating in a big incident in 1970 called “the Koza riots,” during which citizens set fire to American owned cars. The riot was an extension of complaints against the buildup of American bases and the discrimination and oppression local residents felt. The riot was sparked by an incident, in which an Okinawan housewife was killed when she was ran over by an American soldier’s car in Itoman.

At the same time, Ryukyu and U.S. friendship projects were often carried out. For example, the Zento (All Okinawa) Eisa Contest was a predecessor to the present All Okinawa Eisa Festival, and the Ryukyu and U.S. Friendship Carnival were events jointly organized and sponsored by Koza, Kadena, Yomitan and Kadena Air Base. Even when Okinawa was returned to Japan and celebrations occurred all over the Ryukyu Islands, there still were residents who were against the Ryukyu reversion.

The reason why Koza can be proud of being an international town is its people coexist with Kadena Air Base no matter how complicated the relationship. Its people have a remarkably ambiguous position and complicated history, and people elsewhere in Okinawa might do well to look at Koza’s multicultural community where everyone can be oneself.

There is an exhibition room called Historeet at Palmyra Street next to Park Avenue. There one can see a picture exhibit of the history of Koza in the age of the U.S. Governance. The exhibition is open from Tuesday through Sunday, 11:00~19:00.

Koza used to be known as the mecca of Ryukyu folk songs. Some of the most popular Ryukyu folk musicians, persons like Seijin Noborikawa and Rinsuke Teruya who became known to people as “Teru-rin,” are from Koza. Jazz had its golden age at the time right after the war, followed by a boom in pop and rock’n roll, musicians and bands who performed in front of American military audiences experienced a boom that continues to this day.

During the Vietnam War, rock musicians performed live shows in front audiences of very excited American soldiers at A-sign bars every night. The musicians had often bottles thrown at them from the audience if their performance didn’t please the audience. Musicians polished their skills and created an original music scene “Okinawan Rock.” Famous rock bands “Murasaki” and “Condition Green” are the best known representatives the genre.

Even today, many musicians who have inherited the Okinawan Rock spirit continue to play at live houses scattered in Koza, many still unchanged from the old days.

Every weekday night, a “Live House Circuit” event takes place at some live house in Koza, where you can enjoy music performance free of charge. In addition, there are live street performances as well at Music Town on Mondays and Tuesdays from 19:00~21:30. The event is not just for listening; anyone can also join on stage on the spur of the moment!

Musicians in Koza are not only locals but also come from various regions in the world. Therefore, coexisting with many foreigners from unique cultures and historical backgrounds, tolerance to accept people regardless of race, language and other differences is the greatest attraction of Koza. No wonder this town has developed into a town of music, because music is the common language around the world.