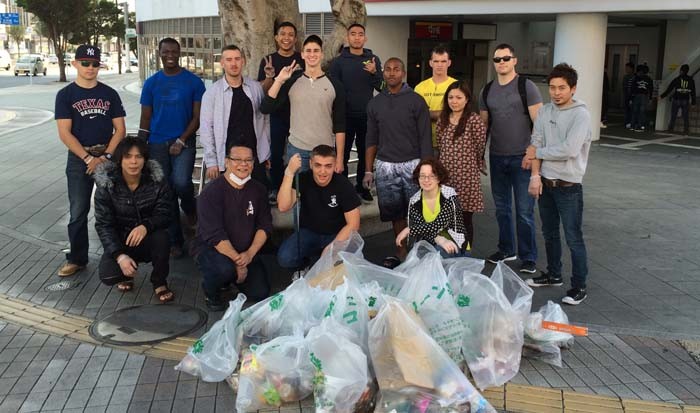 People from various organizations get together once a month to clean the Gate 2 Street area from trash and garbage.

Have you ever noticed a group of people cleaning up parks and sidewalks on Kadena Gate 2 Street every third Sunday?

The people participating in the cleanup activity are members of a volunteer group on Kadena Air Base called ACE, the Okinawa City International Association and Koza Gate Street Society. The cleaning activity has run for over 10 years, and everyone can join to the cleanup. No need for any sign-up, either. Just come to the street at 10 a.m. on every third Sunday. 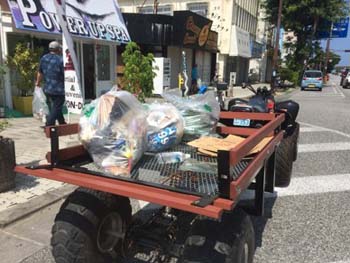 A new buggy helps to carry the trash and garbage.

The reason why the cleanups started was that after every weekend large amounts of empty cans, cigarette butts and other trash appeared in front of shops and flowerbeds along the street.

Now, everybody loves a weekend and wants to have fun. That’s understandable. However, it’s not good to throw trash and cigarette butts everywhere. The street is not a garbage can. Many people use the street and some have businesses there also. Think of what would happen if everyone threw their trash on the street and no one would clean the mess up. Someone had to do something.

Volunteer groups collect about 15 to 20 large garbage bags of trash from Gate 2 Street every month, but more needs to be done. The groups got a buggy to carry the garbage bags from SPARK at Miyazato, Okinawa City, last month that makes their work a little easier.