The Ryukyu Golden Kings faced Kyoto Hannaryz on Wednesday night in a single match at Okinawa City Gym. Wednesday was a Japanese national holiday, but the Hannaryz team did not take the day off, and beat the Kings with a commanding gap 54-69. 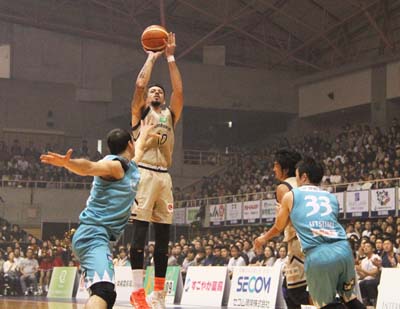 The Kings now stands in the 4th place in the Western Conference with 8 wins against 9 losses.

Kings used one foreign player in the 1st quarter against Kyoto’s two, and could not get their wave of the game rolling at all. The first quarter ended the King’s trailing 9-21.

The team tried to reverse the tide in the 2nd quarter placing two foreign players against Kyoto’s one, but that did not help and the first half ended 27-37.

The same trend continued throughout the game that finally ended with the Kings trailing 54-69. 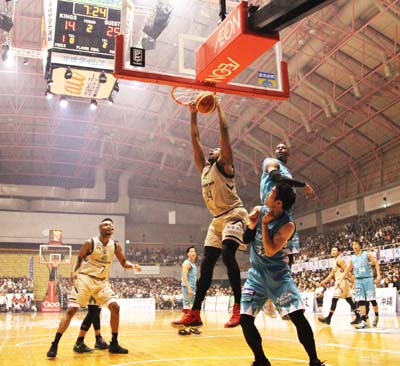 Lamont Hamilton scoring one of his seven points.

In his first home game, Rayshawn Terry showed his ability scoring 20 points and nine rebounds that made him the highest scorer in the match. Shuhei Kitagawa and Lamont Hamilton scored seven points each.

After the game, Head Coach Tsutomu Isa lamented his team’s weak offense for the loss, saying, “In our last couple of games, including tonight, we clearly have been lacking in our ability to score. If we could score more, the game would have changed. We have to think how to change the style of our offense play to more aggressive.”

In the game, the Kings managed to score only one of their 14 three-point shots, and just 61.1% of the team’s free throws were successful.

The next games of the Kings will be a pair of road games against the Seahorse Mikawa this weekend. Seahorse is currently in the 1st place in the Western Conference.