Okinawan religion centers on family, based on mix of beliefs 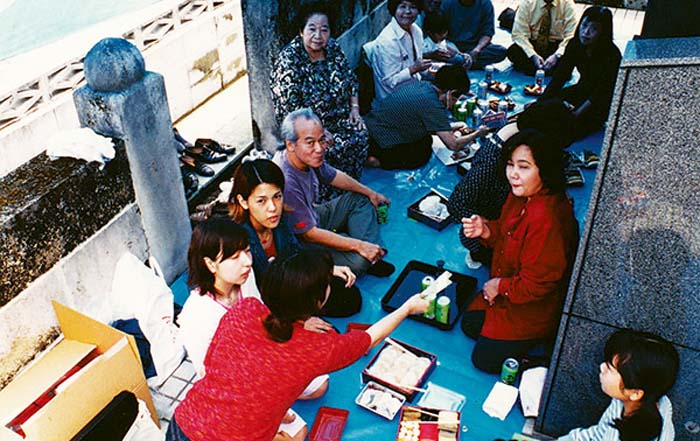 Shiimii, a sort of picnic at family tomb, is an important event.

Religion talks about the “relationship between humans and the Maker of all existence.” The Maker has different name in different cultures and is called ‘God’ in English, ‘ Kami’ in Japanese, ‘Shin’ in Chinese, and so forth. Curiously, all world major religions originated in Asia. Judaism and Christianity in Israel, Islam in Saudi Arabia (West Asia), Hinduism in India (South Asia), Buddhism in Nepal (Central Asia), Neo-Confucianism and Taoism in China (East Asia), and Shintoism in Japan (East Asia). These Asian born religions spread all over the world, and they have been influencing about 90% of the world population.

Okinawan religion is believed to have been developed from animism, which was superimposed by shamanism, ancestor worship, Taoism, Buddhism, Neo-Confucianism, Shintoism, and others. Animism is “the belief that all things have a spirit or soul, including animals, plants, rivers, mountains, rocks, stars, the moon, and the sun. Each being is considered a spirit that can offer help or harm to humans.”  In short, Okinawan religion is a hybrid religion, a mixture of multiple beliefs. 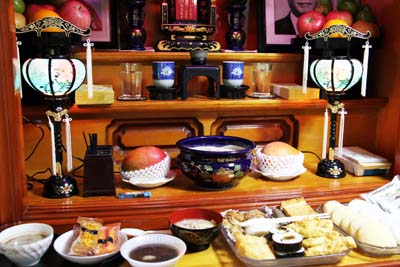 The centerpiece of Okinawan worship and religion is the home altar.

In the early 16th century, King Sho Shin adapted ‘theocracy’ when he established the office of High Priestess who engaged in religious rites and ceremonies in the state affairs of the Ryukyu Kingdom. High Priestess was called ‘Kikoe-Ogimi’ or ‘Chifijin Ganashiimee’ in the Ryukyu language. Kikoe-Ogimi appointed the district priestesses called ‘Noro’ or ‘Nuuru’ who were in charge of the religious affairs in the local regions.

The High Priestess and local priestesses gave prayers at the sacred places called ‘utaki’ where gods descend from heaven to listen to the prayers. All the villages and castles had one or more ‘utaki’ where the prayers of peace, safety, prosperity, good health, thanksgiving, and so on. were given to god with the offerings at the altar. At the center of ‘utaki’ was a natural stone called ‘ibi’ that was usually surrounded by palms and other trees. In front of the ‘ibi’ was the altar where incense and offerings were placed while prayers were given.

Priestesses directly prayed to god at ‘utaki’ where god descends and ascends from and to heaven. Therefore, there was no need of a gigantic building like a temple, shrine, cathedral, and the like in Okinawan religion. When ancestor worship was introduced from China, the family altar was made by the head family to enshrine the spirits of their ancestors. The names of the dead are written on the wooden tablets called ‘ihai’ which is placed on the top tier of the family altar. On the first and 15th day of each month prayers are given by the family members.

New Year lasts from the first to the 4th day of January. People get busy cleaning their buildings, doing shopping and other tasks at the end of the year to prepare for the up-coming New Year. People send ‘Oseibo’ the year-end gifts or ‘Nenga’ the New Year’s gifts to their relatives and to those from whom they received favors in the past year. Adults give New Year’s gift of money to their small children, relatives’ children, close friends’ children, their grand and great grandchildren, so that both the givers and the recipients are happy.

‘Siimii’ is another important religious event for the island people, which lasts from late April through early June. Families can choose whichever day is convenient for them but usually it takes place on either Saturday or Sunday. ‘Siimii’ is the tomb-visit day. Families take traditional Okinawan foods to the ancestor’s tomb for food offering and thanksgiving prayer. All family generations get together for eating and chatting after the prayer. There is a joke ‘siimii’ in regard to why it is called ‘siimii’. Once a year family ancestors need to have communication with their descendants and they are calling “come see me” (siimii). 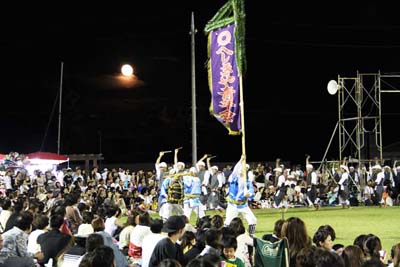 Obon brings out the ancestors’ spirits and Eisa dancers to entertain them during their annual re-entering to the world of the living.

Obon lasts three days and three nights in midsummer from August 13 to 15 according to the lunar calendar in Okinawa. On August 13 the family toms are cleaned and the spirits of their ancestors are invited to their family; branch families visit their head families and close relatives with the gifts of offering to give prayers at their family altars. The 14th is called ‘Naka-nu hi’ or middle day of Obon and food offerings and prayers are given; August 15 is the last day of Obon that is called ‘uukui’ or ‘sending off day’ and all family generations get together to give the last prayers. They enjoy eating and chatting until the time of ‘uukui’ that takes place at the front gate of the house to send off the spirits of their ancestors for whom ‘paper money’ is burnt for them to take it and spend it in heaven. Some foods are also given to the lost and wondering spirits that are hanging around, for their families might have died out in the battle of Okinawa or for some other reasons. After the ‘uukui’ the villagers and towns people get together and engage in obon dance called ‘eisa’ in which the sounds of ‘sanshin’ and drum are heard till late at night.

Okinawan religion doesn’t require a large religious structure like a temple or shrine, and it’s a hybrid (mixture of many other beliefs) religion.