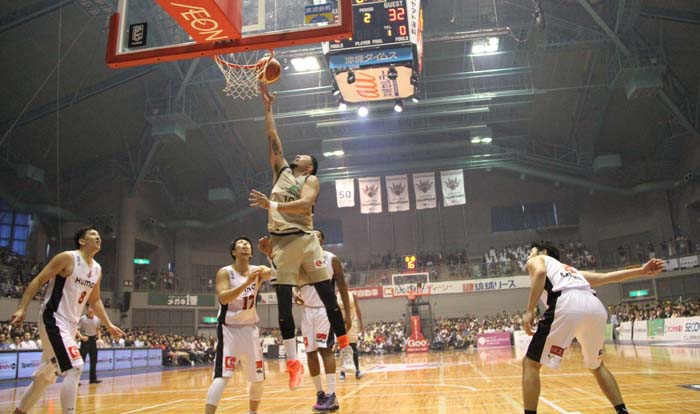 Kazuya Hatano is about to score one of his 12 points on Sunday.

Osaka Evessa greased the floor with the Golden Kings on Saturday in front of the King’s home crowd, and the added insult to injury by scoring the winning points in the Sunday match just one second before the buzzer. 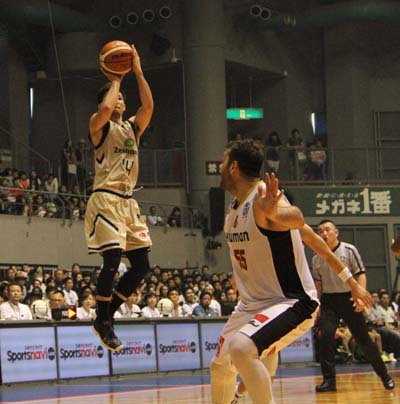 Ryuichi Kishimoto aims at the hoop on Sunday for one of his 21 points.

The double loss also means that the teams switched standings in the Western Conference, with the Kings going down to the 4th place, and Osaka coming up to the 3rd place. The weekend pair were the only B. League games at the Ginowan City Gym for the Kings this season.

From the beginning on Saturday, the Kings could not get their game into gear and were not able to play in their own style resulting in a historically big gap loss. The Kings now have three consecutive losses, as they lost their Sunday road game against Shiga Lakestars last weekend.

The final numbers on Saturday were 57-96, which is a 39-point gap showing that the Kings could not ride the wave of the game at all through the whole game.

Head Coach Tsutomu Isa said only. “That was not what we can call a basketball game tonight, it’s very, very regrettable.” 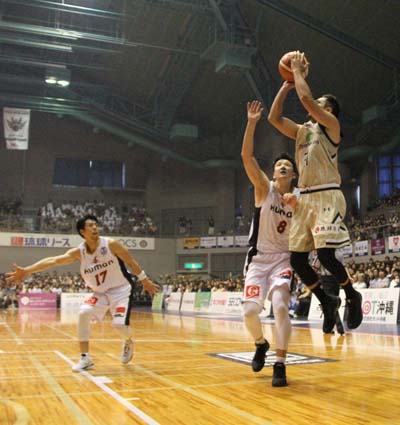 On Sunday, the Kings again had a difficult start. However, Shuhei Kitagawa and Kazuya “J.” Hatano played tenaciously and even managed a double-digit lead at one point. However, Osaka also worked well, and at the halftime the score was 49-45.

In the 3rd quarter, the Kings’ defense worked good, and the Kings led with an 11-point gap at the end of the quarter.

But in the final quarter, Osaka found and extra gear, and came from behind to event out the game scoring the winning two points just one second left..

After the game, Isa admitted, “I really wanted to avoid being swiped, and very regrettably, we handed the win to Osaka by my miss. Offense miss led to defense miss, either way, we must keep training more.