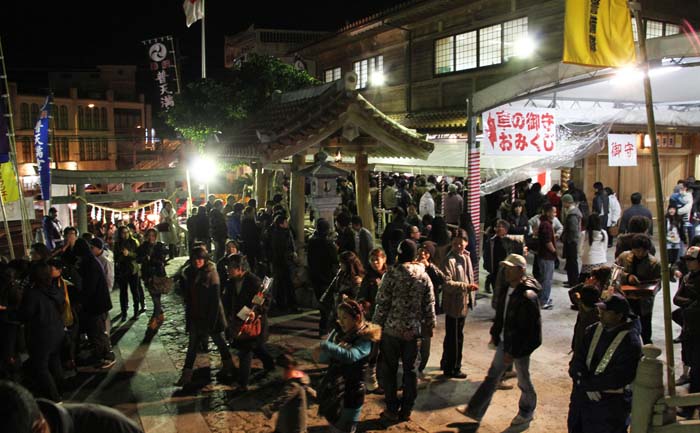 All shrines are very crowded from the evenig of Dec. 31 through Jan. 3rd.

The first visit of the year to a shrine or temple is an important Japanese tradition. About three quarters of the Japanese are said to be following the tradition with the first visit usually taking place on the first three days of the new year, which are days off from work to almost everyone.

During the visit, people offer one year of gratitude, and pray for safety and peace for the new year. The prayers can be made either in a shrine or temple, the difference being that Shinto religion is practiced in a shrine and Buddhist worship takes place in a temple. 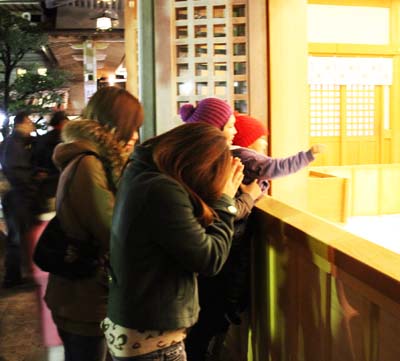 Most people in Japan practice both faiths and there are no restrictions of doing so. Shinto tends to be viewed as the religion of earthly matters and shrines are often used to host weddings and are where one would go to pray for success in life or business. On the other hand, Buddhism is considered the religion of spiritual matters, and temples usually host funerals and are where you would go to pray for your ancestors.

As everyone tries to get into a shrine on one of the first three days of the year, they are very crowded. Especially after midnight on Jan. 1st, one can expect to stand in line for a long time to wait for a turn to give prayers. On Okinawa, Naminoue Shrine in Naha is the most popular destination with tens of thousands of people visiting the shrine standing in lines well before the midnight. The two other most popular shrines are in Futenma and Onoyama in Naha. 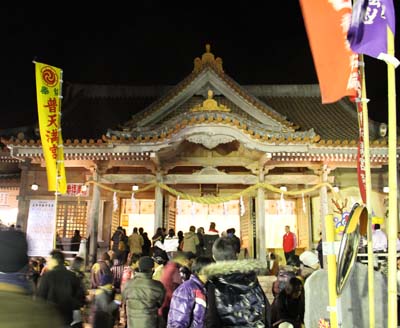 All major shrines are open 24-hours a day during the first three days of the new year.

All three are open 24 hours a day during the New Year holidays to accommodate the visitors.

During the visit, people write their wishes on wooden plates called “ema” and draw fortune letters called “omikuji” that are hung on a special wall at the shrine. There are stalls that sell lucky charms that people take to their home, and charms from the previous year must be returned to the same shrine they were purchased, and burned in a bonfire outside the shrine.

The most popular shrines on Okinawa are open through the night and very crowded with during the first three days of the new year..

Okinawa Gokoku Shrine, 沖縄県護国神社 is in Naha City in Onoyama Park. People go here for family safety, traffic safety, warding off evil spirits, recovery from illness, success and prosperity in business and realization of general wishes. It is open around-the-clock December 31st through January 3rd, and from 8 a.m. ~ 6 p.m. from January 4th onward. Visitors can park at Onoyama Athletic Park.

Naminoue-gu Shrine, 波上宮, is considered important for family safety, safe childbirth, prosperity in business, good health, warding off evil spirits, public well-being, good catch of fish and safe journey, and is at 1-25-11 Wakasa in Naha City. It is open 24 hours from December 31st through January 3rd, and from 7 a.m. ~ 6 p.m. from January 4th. Only pay parking is available in the area.

Okino-gu Shrine, 沖宮, is at 44 Onoyama-cho in Naha City. It is open 24 hours from December 31st through January 3rd and from 7 a.m. ~ 7 p.m. from January 4th through 7th. Approximately 200 parking spaces are available through January 3rd.

Okinawa Narita-san Fukusen-ji Temple. 成田山福泉寺, promotes prosperity in business, traffic safety, good health and family safety. It is located in Nakagusuku Village at 617 Ishado. It will also be open 24 hours from December 31st through January 3rd, and from 6 a.m. ~ 8 p.m. from January 4th. About 400 parking spaces are available.