In Japan, as elsewhere in the world, folktales filled with supernatural phenomena and mysterious creatures have been part of the cultural imagination for as long as history itself. Folklore of the Japanese variety is full of monsters, ghosts, goblins, spirits, phantoms, demons, fantastic beings, and the supernatural, collectively known as yōkai. Taken as a singular term, the word yōkai is difficult to translate, and to merely describe it as folklore is a bit misleading and overly simplistic. Nevertheless, yōkai tales are integral part of Japanese culture, and in recent decades the fantastic fables and creatures of yōkai lore have crossed over and become dominant features in contemporary mainstream mediums such as anime and manga.

Traditional Okinawan yōkai may not be as robust as their Japanese counterparts, yet the folktales and imaginary creatures that do exist in Okinawa’s repertoire are no less important to the region’s cultural makeup as those in mainland Japan. Easily the most popular of these myths is the notorious kijimuna, a rascally, fairy-like creature that is believed to live in gajumaru (banyan) trees. Kijimuna—aka bungaya, meaning “large-headed”—are small, child-like creatures with disproportionately big heads, long, scruffy orange hair, oversized hands and large, gleaming eyes. 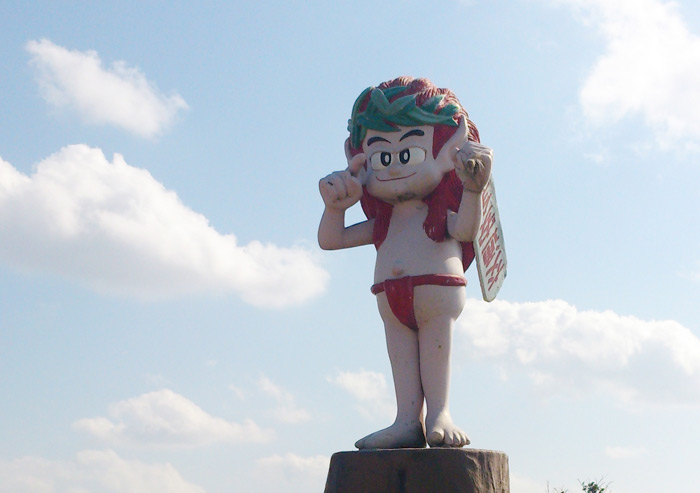 Kijimuna statues can be found island-wide.

Mischievous by nature, kijimuna are known to play tricks on humans; one of the most common involves laying on the chest of human during sleep, making them immobile and unable to breathe (kanashibari; sleep demons associated with sleep paralysis are common among Japanese yōkai). Kijimuna, much like other yōkai, are often associated with mysterious fires and have been seen covered in ghostly flames running along beaches or riverbanks. If one were to wake up and discover a paper lantern missing, it’s quite possible a kijimuna hijacked it in the middle of the night and ran off. Kijimuna hate octopus above all else. So keeping an octopus around is the best way to ward off any potential attacks or hijinks from a bored kijimuna on the prowl.

Despite such devious tricks, kijimuna are generally good at heart and also known to befriend humans. Such friendships, however, are relatively short-lived due to the puckish and jealous nature of kijimuna. Known to be excellent fishermen, if a kijimuna really likes a human they’ll give fishing tips and perhaps even offer the bodies of the fish they’ve caught—after eating out the fish’s eyeballs, of course. Yet, if a human doesn’t offer gratitude and gifts in exchange for a kijimuna’s kindness, the kijimuna will soon lash out, behaving in a childish manner and bring the friendship to an abrupt end.

Like many of the numerous yōkai in Japanese folklore, kijimuna are an essential part of the Okinawan lifestyle. Tales of kijimuna have been passed on from generation to generation for centuries. Nearly every Okinawan young and old can happily rattle off a kijimuna folktale from memory. Images of kijimuna can be found all over the island and have even invaded popular culture in the form of anime and manga characters. So they next time you come across a hyperactive, orange-haired fairy with with an oversized head and hands, you’ll know it’s a kijimuna. Approach with caution, act accordingly or suffer the consequences!