This year’s Camp Schwab Festival will take place Saturday, March 24 and Sunday, March 25 from 1 to 9 p.m. both days on Camp Schwab adjacent to the BeachHead. This annual festival welcomes all service members, their families and Japanese citizens to Okinawa’s northernmost Marine camp to partake in a weekend of festival food and fun with attractions for all ages including Fun Land’s rides and bouncers, game booths, Oculus Rift virtual reality and delicious foods including delectable offerings from MCCS. 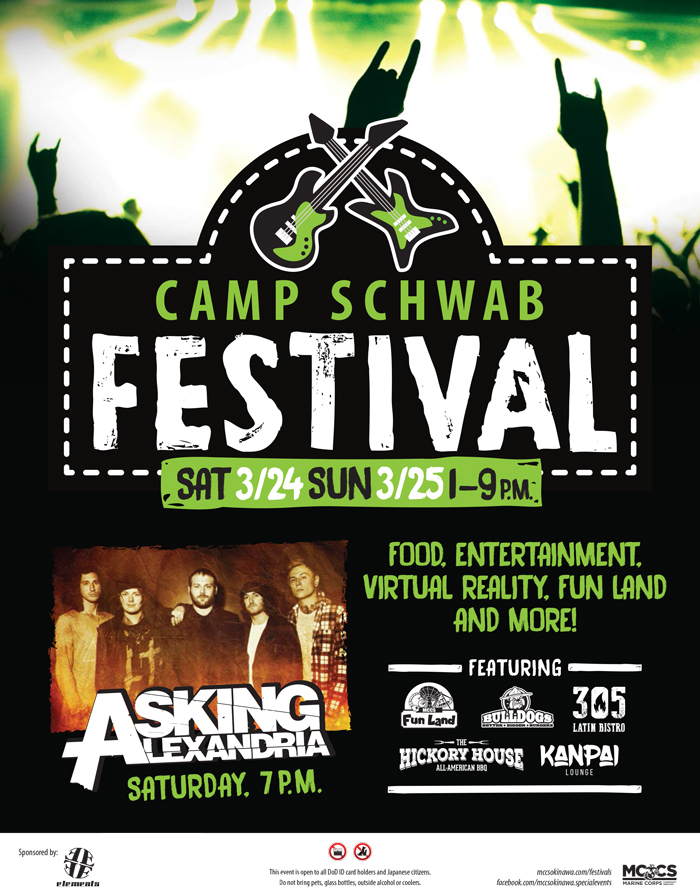 Patrons 20 years of age and older and enjoy refreshing adult beverages from Kanpai Lounge.
A great entertainment lineup will be on tap throughout the weekend including a FREE performance by metalcore band “Asking Alexandria” on Saturday at 7 p.m. Asking Alexandria, originally from England, are heavily influenced by American rock—including Metallica, Mötley Crüe, Skid Row, Slipknot and Avenged Sevenfold.

Admission to the Camp Schwab Festival is FREE and open to all SOFA status and Japanese citizens island wide. No one will be admitted with pets, outside alcohol, glass bottles or coolers. Free shuttle buses will provide transportation to and from designated parking lots on the base. As always, MCCS encourages everyone to drink responsibly and to not drink and drive. Daiko and taxi services will be available.