The Okinawa Rail, also known as the Yanbaru Kuina in its native dialect, is a ground-living bird belonging to the Rallidae family of bird species. It is a flightless bird having an average body length of 35cm. Its most notable features are its red eyes, orange beak, and its white stripes laced along its breast. Its first recorded discovery was in 1981 in the northern forest of the Okinawa main island. The name ‘Kuina’ is the Japanese equivalent to the word rail. The term ‘Yanbaru’, a word meaning ‘northern forest’ in the Okinawan dialect, was affixed to describe where the bird was found – hence, the name, Yanbaru Kuina. 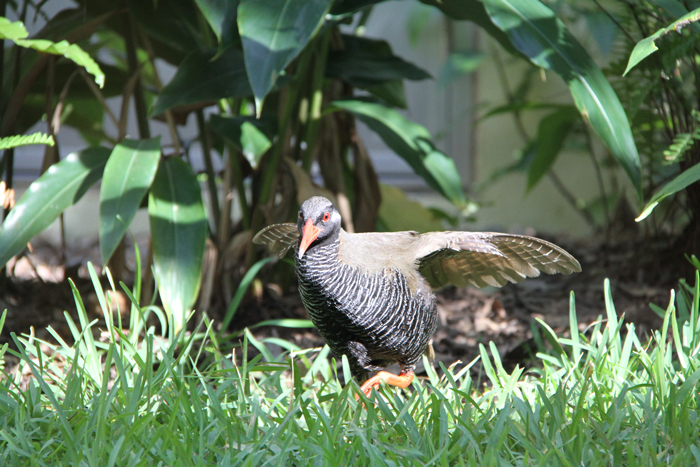 An Okinawa Rail named “Kyon Kyon” is being fed at the Kuina-no-Mori facility.

Since then, the bird has become an iconic fixture in Okinawan culture. Statues and cartoon characters of this bird can be seen all over the island. Because the Okinawa Rail cannot fly, it is vulnerable to other wild animals, particularly the mongoose, which is not native to Okinawa. The mongoose was brought here long ago to prey upon the Habu which where endangering human lives. In an ironic twist of fate, the mongoose, a daylight animal, did not often cross paths with the Habu, a nocturnal creature by nature. Instead, it would feast on the rails’ eggs and younglings during the day, severely damaging their numbers. Deforestation and deadly vehicle run-ins have also contributed to the dwindling population. 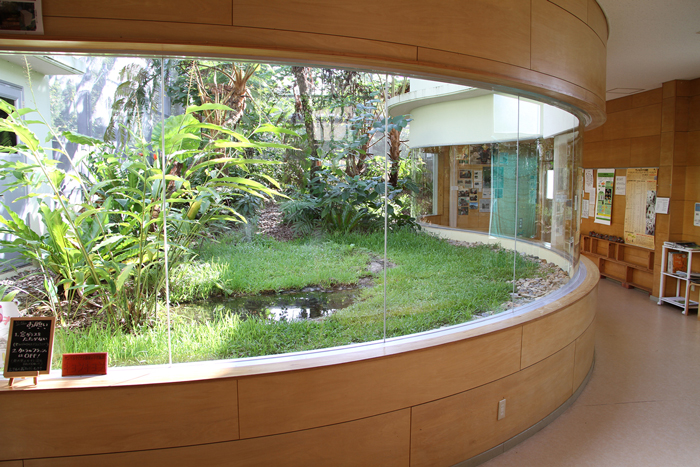 A natural ‘motif’ of the Yanbaru Forest inside the Kuina-no-Mori facility.

Its numbers were so greatly reduced that they were added to the endangered species list and designated a national treasure to help preserve its numbers. Education and safe-driving awareness campaigns are being carried out by government agencies and volunteers, who arduously work day and night to keep the Okinawa Rail safe.