Tomigusuku City is located just south of Naha, the capital of Okinawa, and has become a rapidly growing region in recent years. It became the fastest-growing city in Japan six times since its official declaration from a village to city municipality 16 years ago in 2002. Prior to receiving its official city status, it was one the largest populated villages in all of Japan. When it received its city designation, the leaders of Tomigusuku City invited major business companies from both within Okinawan and mainland Japan to establish their businesses in the area. This increased employment as well as directly contributed to the city’s population growth. Despite the growing city-like developments, Tomigusuku still maintains a sizeable amount of farmland, where much agriculture is still cultivated, most notably the mango fruit. It is often said that Tomigusuku is home to the Mango fruit. 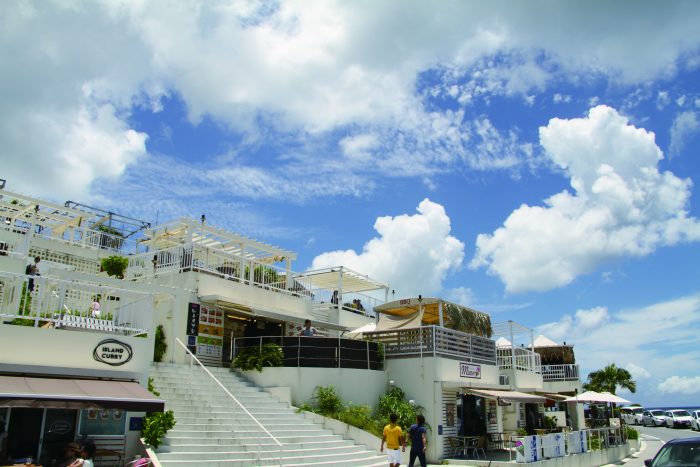 Senaga Island is tiny in relative size but lately has become one of the more popular tourist hot spots on Okinawa.

The Senaga Island, which is a part of Tomigusuku City, has become one of the hottest sightseeing spots on the island. The Umikaji Terrace shopping center on Senaga Island has an advantage that most shopping centers do not possess; it sits right next to the ocean. The island was occupied by the U.S. Military after the Battle of Okinawa from 1946 through 1977. Soon after the island was handed back to the Okinawans, it became a fun spot for locals as many would come to go camping, stop by to see the sunset, play in baseball tournaments, watch aircrafts fly and takeoff from the neighboring Naha Airport, swim, fish, windsailing; you name it. This was a tiny little getaway for many Okinawans. In recent years however, the landscape has changed so much. It has become more of a tourist hotbed bringing in thousands of people on a daily basis. Despite its recent land developments, there is one interesting historical spot on the island that goes back at least over a half a century. There is large stone called “Kodakara Iwa” (Cover Picture) which literally translates to ‘Child Treasure Rock’. On the stone are two holes, one on top and one below. Long ago it was believed if you put a small pebble or rock through the top hole, you will have a baby boy; and if you put it through the lower hole, you will receive a baby girl. The rock currently on location is a replica. It is not the original stone. The original stone was destroyed during the Battle of Okinawa. 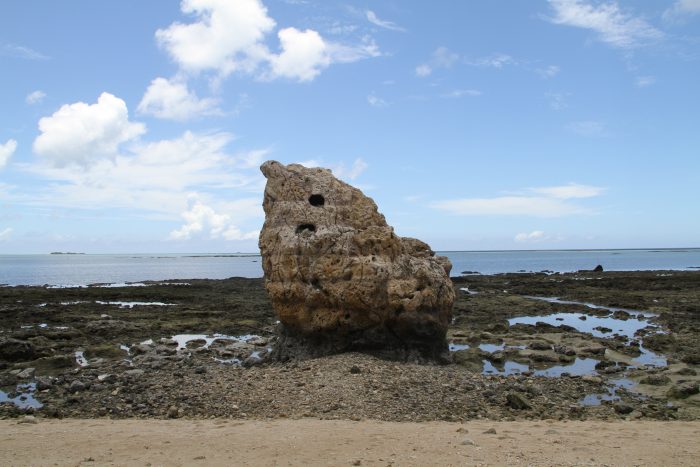 The Madanbashi Bridge ruins are an important historical asset of Tomigusuku City. The original stone bridge was built in 1708 and stretched over the Kokuba River. And even before that, the original bridge was built in 1522 and made out of wood. Unfortunately, today nothing remains of the old wooden bridge. The stone bridge went under some repairs in 1837 and went unhindered till 1945 when the Japanese military destroyed it during the Battle of Okinawa. In 1963, the interim Ryukyu government made a brand-new bridge where it remained in use till 1995. During a restoration project that same year, some ruins of the old bridge foundations were discovered on both sides of the river. They are preserved in their original form to this day. 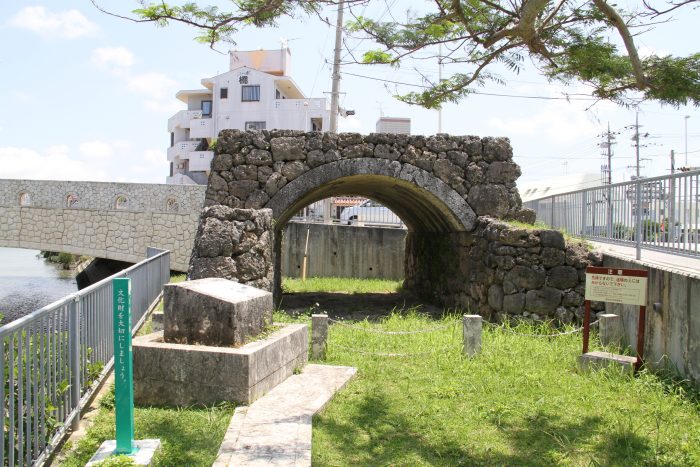 The Madanbashi Bridge ruins highlight the historical side of Tomigusuku City.

Tuduruchiga is water spring in Tomigusuku City and Seseragi Park is a stream park where water from the Tuduruchiga spring flows. The park is narrow at 600m in length and suiting for walking. The water was used daily life during the Ryukyu Kingdom era. It was an important source of water at the time. The stream eventually flows down a small waterfall. It is an interesting spectacle to see in an urban city.   Because there is much water at park, many kids play there during the day. 78-4 Taira, Tomigusuku City. 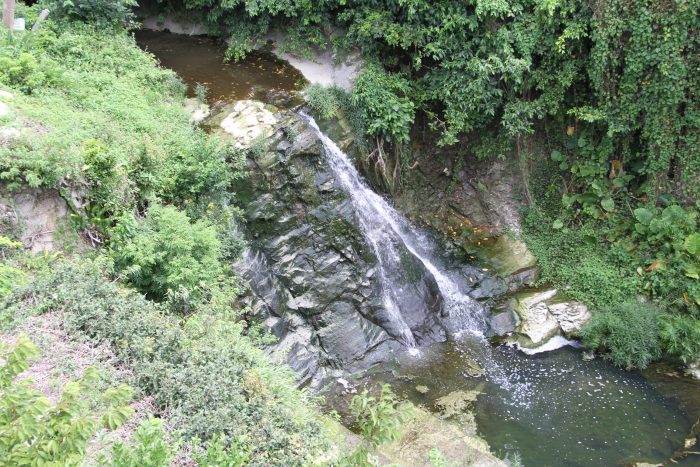 A small waterfall made by Tuduruchi water spring.

The Former Japanese Navy Underground Headquarters was built as a bombproof shelter for the Japanese Navy in 1944 as World War II was nearing its end. Today, the headquarters is a historical landmark and sits right along the border of Naha and Tomigusuku City. 1944 saw the turning point for the U.S. Military as Japan was losing the war. In a last-ditch effort, Japanese forces decided to build up its military defenses on Okinawa in order to prevent U.S. from launching an invasion attack of the Japanese mainland. As a part of the effort, the Navy built an underground headquarters complex on a hilltop to help protect Oroku Airport (the current Naha Airport). Almost 3,000 Japanese Navy sailors took part in building the underground facility. Much of this labor included Okinawans as well. The work was mostly done by hand with picks and shovels. The end result was 450 meters of tunnel, barrel-shaped and beefed up with concrete and lime plaster to absorb heavy U.S. naval bombardment. 4,000 military personnel manned the complex. After the war, the tunnels were left as they were and would be left untouched for over 30 years. In 1977, the Okinawa Tourism Development Association restored 300 meters of the facility and opened it up to the public. The Former Japanese Navy Underground Headquarters opens: 8:30~17:30 (Jul. ~ Sep.), 8:30~17:00 (Oct. ~Jun.). Entery fee: ¥440 for adults and ¥220 for children. Open 365 days. Tel: 098-850-4055. 236 Tomigusuku, Tomigusuku City. 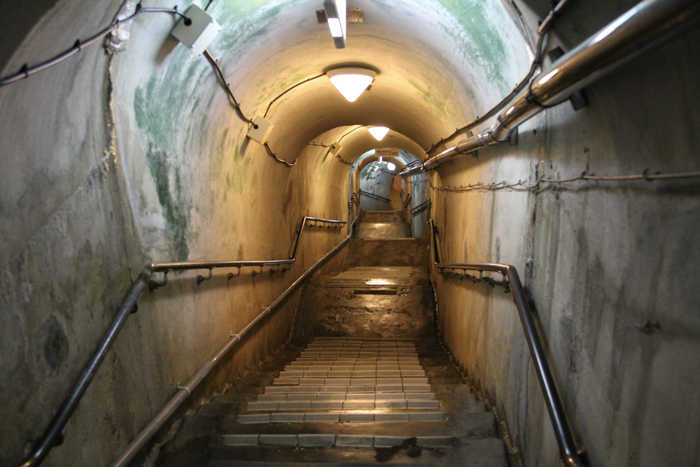 Inside the Naval Underground Headquarters, like walking back in time.

The Manko Wetlands, an official Ramsar Site, consist of a diverse ecosystem that is home to many species of animals. It borders the very populated and developed Naha City. The Manko Wetlands is an important stopover and wintering site for many shorebirds and home to thousands of fish and benthos species (organisms that occupy the seafloor). The Black-faced Spoonbill, an endangered species, visits the Manko Wetlands in the winter. The wetland is considered small for its size but does support various types of habitats. Most of the wetland is mudflat in composition (47ha), which appears at low tide. A mangrove forest, as well as small patches of reeds, reside along the southern shore. On May 15th, 1999, the Manko Wetlands received its official Ramsar Site designation. The name Ramsar stems from the location where the wetland convention was founded which was in Iran, the city of Ramsar. For more information about the Manko Wetlands visit http://www.manko-mizudori.net/english/ Address: 982 Tomigusuku, Tomigusuku City. Tel : 098-840-5121 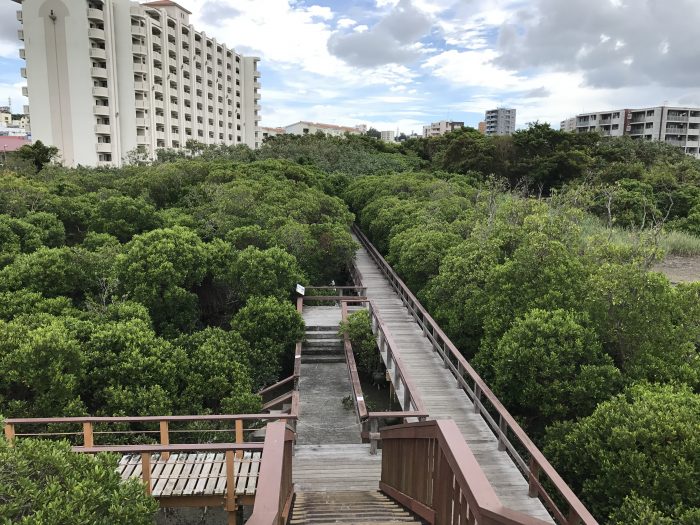 Watch nature in action; take a walk through on the boardwalk at the Manko Waterbird and Wetlands Park.

The Takayasu House is an old Okinawan-style house inside the Onaga District of Tomigusuku City. The house has important significance as it became home to a very key figure in Okinawan and Japanese history. Albeit this individual would stay there for only a couple months, he would make great use of his time. This man is John Manjiro. Originally from Kochi Prefecture of Japan, John Manjiro would be instrumental in opening international relations with Japan in 1854, ending over two centuries of Japan’s isolationism to the rest of the world. John Manjiro was aboard a fishing vessel when it was wrecked. He was rescued by a U.S. whaling ship and taken back to the U.S. where stayed there for about nine years. Upon his return to Japan, he stopped over at the Ryukyu Kingdom and was detained and confined at the Takayasu residence, where he would become good friends with the family. There he would learn the native Okinawan language and immerse himself in the local culture, even participated in the town’s festival and tug-of-war. Even this day, there is good relations between the Takayasu family and the Nakahama family (John’s family). The house sits on private land and not accessible to the public. 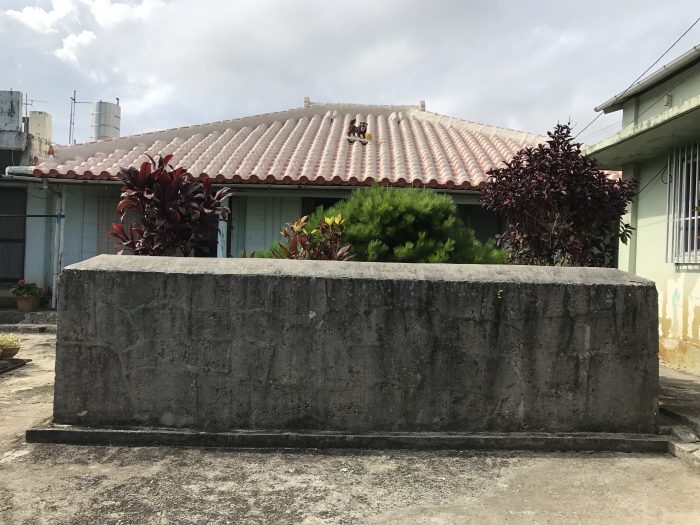 The Takayasu House, where John Manjiro took residence during his only a couple months in Okinawa.

The Road Station Toyosaki is located near the coastal area of Tomigusuku City, near Chura Sun Beach. At the road station you will find the Tomigusuku’s Farmers Market “Nanairo Batake”, the Tomigusuku City Tourism Center, and specialty shops which sells crafts works composed of dye made from sugarcanes called “Tigumakan”. You will find other souvenir stores there as well. The farmers market by far draws most of the customers to the road station. Tomigusuku City is well known for their fresh vegetables, and customers visit daily to get the freshest stock available. 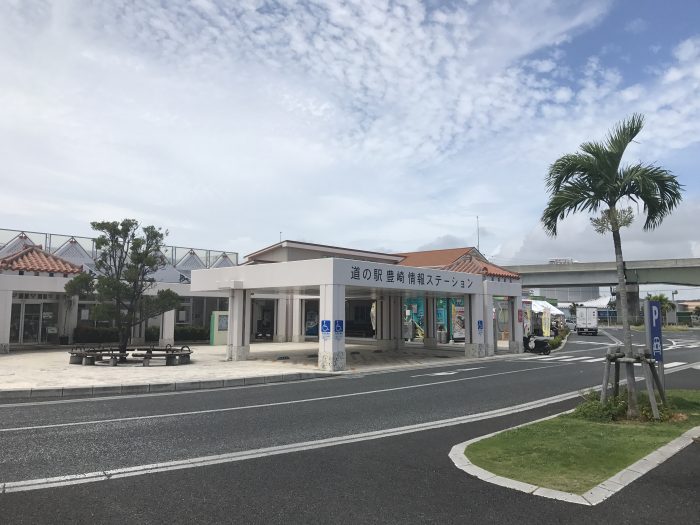 A great resting spot for both locals and tourist, the Toyosaki Michi-no-Eki.

Chura Sun Beach is also a popular hotspot in Tomigusuku City. It is perhaps the closest public beach from the Naha Airport. Incoming and outgoing flights are a constantly flying over the beach and adds a nice touch of background noise against the ocean waves. The beach itself is man-made and stretches for about 700m in length and is one of longest beaches on Okinawa. During open water season, life guards are on station. The beach opens 9:00~18:00 from April through June and from September through October. And opens 9:00~19:00 in July and August. Parking is available, but there is a surcharge for stays over one hour. The parking lot closes at 22:00. Showers, lockers, and toilets are available. 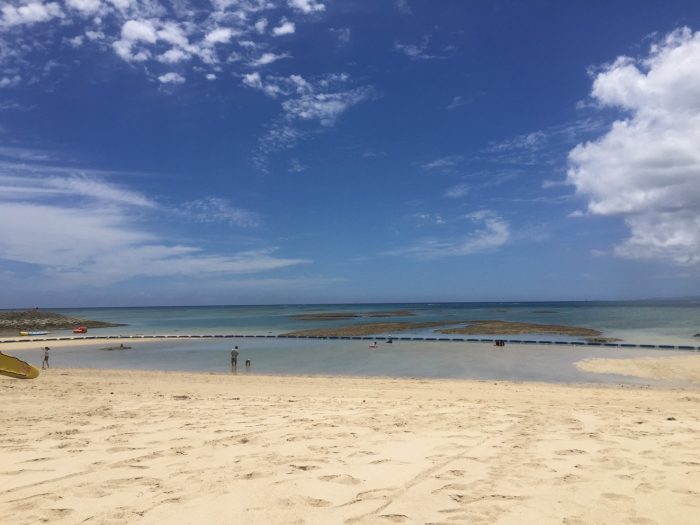 The Ashibinaa Outlet Mall was the first shopping center outlet in Okinawa and is located in the Toyosaki district of Tomigusuku City. It opened in 2002. The outlet mall draws in thousands daily and customers can shop for major brands that are not found anywhere else on the island. Ashibinaa means “play field” in the Okinawan dialect, a fitting name for such a venue where people can come and shop to their delight’s end. 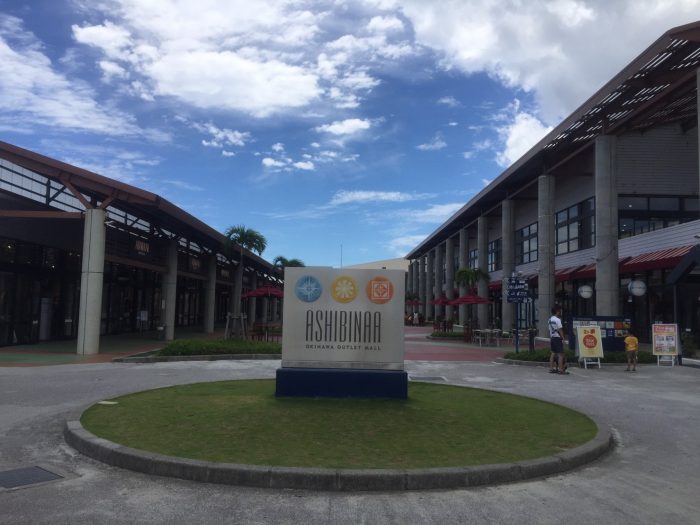 Shop to you drop at the Ashibina Outlet Shopping Center.