Spotlight on Yomitan, most populous village in Japan 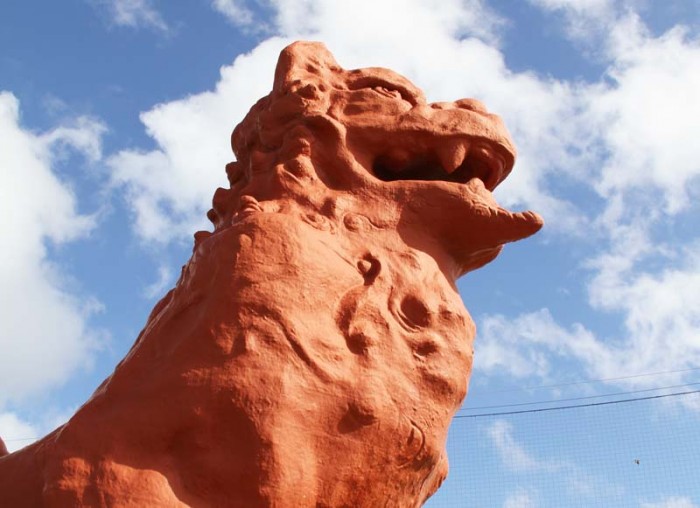 The largest shisa on Okinawa, and befitting symbol to Yomitan’s fame as the center of pottery, keeps watch over Zampa Misaki Park in Yomitan.

Yomitan is located on the west coast of central Okinawa, bordered by Onna Village to the north, Okinawa City to the east, Kadena Town to the south, and the East China Sea is to the west. It’s symbol is the flying phoenix, derived from the fact that the shape of the village resembles a bird in flight. The official village flower is the bougainvillea.

Yomitan was a site of fierce fighting during the American landing at the end of the World War II, and the Japanese military used Zakimi Castle as a gun emplacement. Hijagawa River mouth in Yomitan was the site of the initial landing of the Allied Forces in the Battle of Okinawa. Until WWII Yomitan was known as Yutanza, but after the war the village was renamed to Yomitan.

The biggest cash crop of Yomitan is chrysanthemum, followed by sugarcane and pigs. Another important crop in Yomitan is the purple sweet potato (beni imo), an important part of the local folklore, culture and tourism industry.

Yomitan has plenty of places to see and enjoy, and one of its historically famous products is the Yomitan Hanaui, a cloth weaving style originating in Yomitan, carrying a 600-year history from its introduction to the village. In the Meiji Era this weaving method began gradually to decline, and after the WWII it became the “phantom Hanaui”. Nowadays there are places where you can actually experience this weaving method (for more info: http://www.yomitanhanaori.com/).

The village is also home to the U.S. Army’s Torii Station. “Torii” is Japanese meaning the gate of a shrine, which would explain the huge red colored shrine gates over the base entrance.

When passing through Yomitan on Route 58 heading north, there is something everybody sees but does not quite understand. There are “statues” of a hog and a bull on green grass in front of a building. This is because the building next to them is actually a meat processing plant called OkiHam.

Powerful Ryukyu warlord Gosamaru built the famous Zakimi Castle between 1416 and 1422. It has two inner courts with walls made of Ryukyu limestone. It has the oldest arched gate in Okinawa.  The view of the East China Sea from the castle’s highest point 123 meters above the sea level is truly breathtaking, and on a sunny day, the Kerama Islands can be seen clearly to the west. UNESCO named Zakimi Caste a World Heritage site in November 2000.

Cape Zampa is located on the northwestern edge of Yomitan Village. The promontory boasts a dynamic landscape with steep cliffs continuing for a stretch of two kilometers. It’s a popular diving spot for experienced drivers. In the area surrounding the lighthouse there is a park with BBQ and camping sites, a multi-purpose playground, walking course and a restaurant.  The park also features an eight meters tall Shishi statue.

“Yachimun” is Okinawan dialect and means “pottery.” Potters and pottery fans from many different places come to the annual Yomitan Tsuboya Pottery Fair. The Living National Treasure Jiro Kinjo has his kiln here, too. Along the Pottery Village Street, many pottery artisans have set up their store where they permanently display their wares for the public to purchase.

Murasaki Mura theme park was originally built as the backdrop for a long-running historical drama series on the national NHK TV. The park was designed visualizing Naha City during the Ryukyu Kingdom in the 15th century. The theme park features handicrafts, restaurants serving authentic Ryukyu cuisine and 101 types of different experience programs for visitors.

Gala Aoi Umi is a salt-producing theme facility along the coast of Yomitan Village. The facility features an exhibition of extracting salt from seawater by heating it up in a vat with firewood. A display of rock salt from around the world is also there, as are exhibition facilities producing sea salt by new eco-friendly methods, including condensing seawater by wind-driven nets and then crystallizing the salt in containers made of red Ryukyu roof tiles by natural solar heat. Glass and pottery making experiences are also offered.

Located on the beach next to Gala Aoi Umi, Sango Batake is a place dedicated to coral preservation and rejuvenating coral reefs. The privately owned facility has managed to find a method to cultivate and transplant coral back into the ocean. Over 50,000 corals are being cultivated, and then transplanted off Okinawa’s shores, where they are maintained to grow into new coral reefs.

In Toya Fishing Port buyers from all over Okinawa gather every weekday starting at 10 a.m. for the daily auction. After the auction finishes, fresh fish are sold in the market at reasonable prices. There’s a restaurant where visitors can enjoy fresh seafood and other dishes.

Yunta farmers’ market has a lot of fresh and cheap vegetables for sale. Plus, this is the only market in Okinawa, which has its own farm product processing plant that sells locally processed agricultural and livestock products. A recommended dish to try to is called Benibuta Burger, which is a pate of pork meat made of meat from pigs that are fed only purple sweet potatoes (beni imo) and fresh vegetables.

Toguchi beach is located inside Hakujou Park, and has a long sandy beach. It’s a little-known beach that has no tourist facilities but local residents enjoy very much.