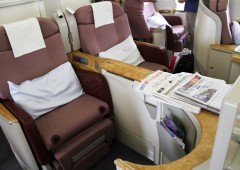 The Taiwan-based air carrier is also touting its Boeing 747-400 airliners, one of the largest aircraft in commercial service.  The airline has 13 of the 400-passenger behemoths.

With connecting flights in Taipei, China Airlines passengers are able to fly to international destinations ranging from Los Angeles, New York, Atlanta, Hawaii, Asia, Europe or Australia.  A convenient feature with China Airlines is that passengers can check their baggage at Naha International Airport, and it goes all the way to the destination without having to be rechecked. 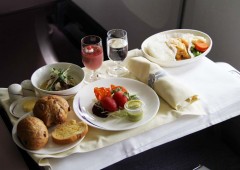 On board the Boeing 747 jetliners, 180-degree reclining seats and air mattresses are offered, along with large tables, a cubby box, USB Port, LED reading light, 110v power for laptop computers and a 15.4” installed AVOD system personal monitor for its entertainment system.  In flight meals are described as outstanding on the international long flights.  The airline even features Taiwanese special meals.

Economy seals are also comfortable, with each seat installed with a 15.4” personal monitor with AVOD entertainment system, a six-step alignment headrest, USB port and 110v power for laptop computers at every seat.