The Communist Party of China has sent a senior official to Japan on Monday in an effort to repair the strained relationship between the two nations.

Since Japan nationalized three islands in the Senkaku chain in Okinawa Prefecture, last week, reciprocal visits of senior officials of the Japanese and Chinese governments and political parties have been virtually halted, leading the party to send Yang Yanyi, assistant minister of the International Department of the communist party’s Central Committee, and other officials.  Yang has served as director-general of the Foreign Ministry’s Department of Asian Affairs and has experience in work to draw up policies on Japan.

The delegates will meet with officials of the ruling Democratic Party of Japan and the major opposition Liberal Democratic Party as well as other parties.  The visit is part of exchanges between the Communist Party and Japanese political parties, the sources said, adding that the Chinese side especially wants to build stronger ties with the LDP, which was due to elect a new leader yesterday. 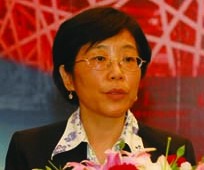 As the Japanese government continues to take a hard line on the Senkaku Islands, called Diaoyu in China and claimed by the country, the Chinese officials hope to find a way to ease the tense atmosphere.  They plan to convey China’s position and start bilateral dialogue chiefly on the Senkaku issue.  A Chinese government official said the position of the government and the party is to have a territorial dispute over the islands recognized and keep intact an agreement made 40 years ago, when Japan and China normalized diplomatic relations, to shelve the Senkaku issue.

The Chinese delegates are thus expected to try to gain a compromise from Japan that maintains that no territorial dispute exists over the islands.  The visit is also apparently aimed at highlighting China’s intention to solve the matter through dialogue.

China hopes to ease tensions between the two countries as soon as possible and restore a stable relationship even if it is not so warm, a source familiar with bilateral relations said.  But it will be increasingly difficult for China to back down unless Japan makes a compromise as anti-Japan sentiment has turned violent, the source said.