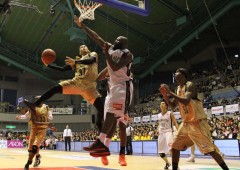 The reigning champions of the Basketball Japan League, the Ryukyu Golden Kings, unveiled their 2012-2013 season Tuesday night with a solid 98-67 win over the Akita Northern Happinets.

Team newcomer Terance Woodbury set the tempo for the Golden Kings, tallying 31 points as the team high scorer.  Already, he says he likes both the team and the environment in Okinawa, and credits veterans Jeff Newton and Anthony McHenry for getting him settled.

Head coach Koto Tohyama says  ”I like the team and I like the style,” and promises to provide Okinawa “with real entertainment and sport.”