Narito Namizato was expecting to be wearing a team uniform of the NBA this season as he follows his dream, but the lack of an offer has brought him home to Okinawa. 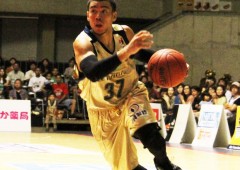 He’s rejoined the Ryukyu Golden Kings and is on the hardwood this week as the league champions take on the Akita Northern Happinets in exhibition games.  Namizato’s focus since last spring, when Okinawa claimed the Basketball Japan League championship, has been to build his muscles and improve his techniques in hopes of receiving an offer from an NBA team.  Since that has not happened, he decided “of course I wear the uniform of the Golden Kings this season.  I am a member of the Kings.”

Golden Kings officials say they want to provide Namizato a good environment for staying in good condition.  The Okinawa squad also acknowledges that an NBA offer to Namizato could see the young player headed across the Pacific in mid-season, signaling they will release him to join an NBA squad or the NBA Development League.  In the meantime, says Namizato, “I will play and contribute as much as I can for the Golden Kings.”