All U.S. Military stationed in Japan now in overnight curfew 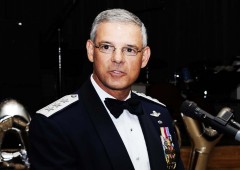 Reacting to the rape of a young Okinawa woman early this week, the U.S. Ambassador to Japan has ordered an overnight curfew for all U.S. military personnel in the country.

Ambassador John Roos issued the order to the U.S. Forces Japan Commander, USAF Lt. Gen. Sam Angelella, who then issued the General Order putting the 11 p.m. to 5 a.m. curfew into immediate effect.  The order mandates that all U.S. military personnel in Japan, permanent party or here on temporary duty, be on base or in off-base quarters during the curfew period.  The approved lodging side of the order extends to those authorized to be staying in hotels or motels.

The General Order does not apply to SOFA civilians, contractors or dependents.  Lt. Gen. Angelella says curfew violations will be dealt with under the Uniform Code of Military Justice.  The general says there are more measures coming, including core-value retraining for both military personnel and civilian employees, as well as a review of the command’s liberty policies.  Lt. Gen. Angelella refused to speculate how long the curfew will remain in effect.

The crackdown came less than three days after two U.S. Navy sailors on a brief Okinawa temporary duty stint allegedly assaulted a woman believed to be in her early 20’s as she walked home about 3:40 a.m. near Kadena Air Base.  Japanese authorities are being very tight with releasing information.

The last time the command issued a lockdown and curfew was in 2008, in the aftermath of another rape incident.  At that time, a Marine was arrested and convicted in U.S. court of raping an Okinawa junior high school girl at his quarters in Kitanakagusuku after picking her up near Koza Music Town in Okinawa City.  Japanese prosecutors dropped  the case, but the U.S. military court martial went ahead.

The two alleged rapists, Seaman Christopher Browning of Athens, Texas, and Petty Officer 3rd Class Skyler Dozierwalker of Muskogee, Oklahoma, aree now in Japanese Police custody.  Both are 23 years of age, an stationed at Joint Naval Air Station in Fort Worth, Texas.  Dozierwalker reportedly has admitted to the allegations, but Browning is denying involvement.  Police investigators found personal property belonging to the woman in the sailors’ hotel room.  They say Dozierwalker may have tried to destroy evidence of the incident.

The alleged rape has so angered Okinawa Governor Hirokazu Nakaima that he has issued a call for a review of the Japan-U.S. Status of Forces Agreement to prevent further crimes and other misconduct by U.S. servicemen.  He held a news conference to criticize the incident, telling reporters the SOFA agreement is “surely at the root of various problems that are beyond understanding.”  He complained that “the agreement gives a kind of extraterritoriality to U.S. servicemen in Okinawa,” noting that troops should have been taught to have enough common sense to abide by Japanese law.

Nakaima is preparing for a five-day visit to Washington starting Sunday, and he’s sure to press his case both for SOFA changes and for reevaluation of the decision to station the MV-22 Osprey squadrons at Futenma Marine Corps Air Station on Okinawa.  Twelve Osprey are already here, and another dozen will be arriving soon.

The Osprey deployment is a longstanding item angering Okinawans, and that’s added to the furor over the alleged rape.  Local assemblies say they’ll issue resolutions condemning the rape.  Kadena Town has already done so and others are expected to follow suit on Monday.

The entire incident has triggered apologies from the entire U.S. government.  At the Defense Department, a Pentagon spokesman announced it will “soon announce a package of measures to ensure responsible behavior” of troops in the country,” while at the same time saying “we take all incidents and allegations involving misconduct by service members seriously.”  George Little, the acting Assistant Secretary of Defense for Public Affairs also said “we deeply regret any grief and trauma the victim may have endured.”  Ambassador Roos apologized to Japanese officials, promising full cooperation in the investigation, saying “we will put forward every effort to make sure that incidents like this do not happen.”

Lt. Gen. Angelella spoke softly but firmly as he said “I want to personally apologize for the grief and trauma the victim has endured and the anger it has caused among the people of Okinawa.”  He spoke more strongly as he declared that American military personnel “are held to a higher standard.”

Defense Minister Satoshi Morimoto says Prime Minister Yoshihiko Noda has instructed ministers to fully consult with the United States over an alleged rape by U.S. sailors in Okinawa to ensure a similar incident does not happen again.  Behind Noda’s instruction is concern that the outrage sparked in Okinawa, following the arrest of two U.S. sailors for the alleged rape, could affect the U.S. military’s operation of MV-22 Osprey aircraft deployed at the Marine Corps’ Futenma Air Station in the densely populated city of Ginowan.  Anti-U.S. sentiment has intensified since the incident in the southern prefecture, where the tilt-rotor aircraft has been deployed despite fierce local opposition due to safety concerns.