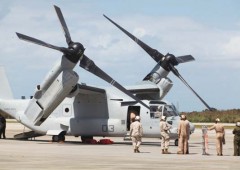 Experts say the deployment of the U.S. Marine Corps’ MV-22 Osprey aircraft to Okinawa could upset China as the plane will make it possible for the Marines to send troops quickly to coastal areas around the East China Sea.

On Monday, six MV-22 Ospreys, vertical take off and landing aircraft that boast a far superior flight performance capability than the CH-46 helicopters currently being used on Okinawa, arrived at Futenma Marine Corps Air Station. China has already sent signals of opposing the U.S. Department of State’s position that the East China Sea islands at the center of a Sino-Japanese territorial row, called Senkaku in Japan and Diaoyu in China, are covered by a provision in the Japan-U.S. security treaty that obliges the United States to defend Japan in the event of an armed attack on territories under Japan’s jurisdiction. As China considers Senkakus a part of its own territory, it sees that whatever happens there is its internal matter, to which no outside powers have right to interfere.

The deployment of the Osprey, which will replace the CH-46 helicopters, is expected to add to Beijing’s anger.  Six more MV-22 Ospreys are set to be deployed at the Futenma base in the coming weeks. The total of 12 Ospreys were transported to the Marine Corps’ Iwakuni base in Yamaguchi Prefecture, western Japan, from the United States in late July ahead of their deployment to Futenma.  “The Osprey will enable us to more effectively perform humanitarian assistance, disaster relief operations and fulfill other roles critical to the U.S.-Japan alliance,” U.S. Defense Secretary Leon Panetta said at a press conference when he visited Tokyo in mid-September.

The aircraft is “important to the defense of Japan,” providing twice the speed, three times the payload and four times the range compared to the CH-46 helicopters, he said.
The Osprey’s combat radius, or the maximum distance that it can reach and return after completing a combat mission, is about 600 kilometers, far more than 140 kilometers for the CH-46.  This means that the Osprey can be sent to areas above waters near Senkaku islands, which are some 410 kilometers from Okinawa’s main island. Recently, patrol vessels of the Chinese government have been spotted frequently in these areas.

The Osprey has an aerial refueling function, and a single refueling using the function extends its combat radius to 1,100 kilometers, enabling the aircraft to cover Seoul, Taiwan and East China Sea coastal regions of China including Shanghai, where the Chinese navy has a key base, and Zhejiang Province, according to sources in the U.S. military. Once the deployment is complete, the Marine Corps plans to conduct exercises in which the aircraft will fly at a low altitude at night and send troops, assuming possible emergencies in the Taiwan Strait and on the Korean Peninsula.