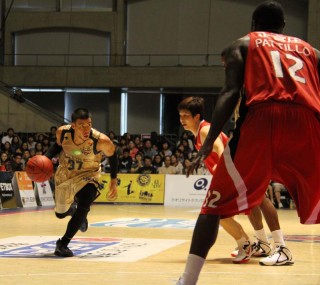 The Ryukyu Golden Kings only had one shot at Korea’s championship basketball squad, thanks to Typhoon Jelawat’s pounding Okinawa Saturday, and that opportunity didn’t go the home team’s way.

Okinawa fell 72-63 to the Anyang KGC in a Sunday afternoon contest played at the Okinawa Convention Center as part of the facility’s 25th anniversary celebration.  Anyang KGC, the Korea League Champion this year, was strong on defense and its precision ball control stymied the Golden Kings, who couldn’t make their shots from outside work. Anyang also outpaced Okinawa both at the free throw line and in rebounding.

The Golden Kings mounted a third-quarter charge, rallying to move only three points behind Anyang, but the Koreans stayed cool and held on for the nine-point victory. 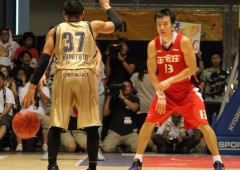 Okinawa’s regular season gets under way this weekend in Kyoto, as the Golden Kings take on the Kyoto Hannaryz.  The Golden Kings’ first home games will be October 27th and 28th at the Okinawa City Gym against the Shiga Lakestars.