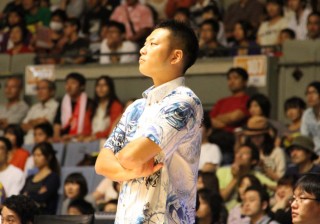 Ryukyu Golden Kings’ new Head Coach Kohto Tohyama has pushed his team to a very strong start of the season winning all of its first four games, and all of them on the road to boot. It’s an evidence that his new ideas of introduding a more aggressive playing style to the team is bearing fruit.

our consecutive wins for the reigning Basketball Japan League champions to start the new campaign.

That’s the way the 2012-2013 season’s begun for Okinawa’s team, with all four victories on the road in mainland Japan.  New head coach Kohto Tohyama is pushing the Golden Kings to new heights, as evidenced by a pair of weekend wins against first the KyotoHannaryz, and then this past weekend the Takamatsu Five Arrows.

The Golden Kings ripped an easy 84-66 win Saturday over the Takamatsu Five Arrows, who finished last season with only two victories.  Okinawa reeled off 50 points in the second half en route to their third win of the season, and then pushed the envelope even more Sunday with a 95-69 win.  Terrance Woodbury scored 21 Sunday, while four teammates reached double figures.

The Golden Kings open their home court season this weekend, taking on the Shiga Lakestars.  Shiga’s shuttle offense is likely to test the mettle of Okinawa’s defense.  Hot shooter Yusuke Inoue’s outside shooting should also be a challenge.  Morihisa Yamauchi is expected to be tenacious on defense against Shiga, guarding Wayne Arnold in an effort to curb his decisive shotmaking. Looking ahead beyond this weekend, Okinawa is again at home in mid-November, facing the Oita Heat Devils on November 17th and 18th.

Elsewhere in the BJL, the Susanoo Magic routed the Miyazaki Shining Suns twice, 77-63 and 86-78, as Shimane opened its home campaign.  The wins give the Susanoo Magic a 3-0 start.  The Oita Heat Devils outdistanced the Kyoto Hannaryz 74-64, dropping them to 0-4 on the young season.  The Shiga Lakestars picked up a pair of wins over the Osaka Evessa, winning 76-64 on Saturday and 74-67 on Sunday.

It was a weekend split for the Toyama Grouses, who outdistanced the Sendai 89ers 82-72 in the first of their two-game set, only to lose the second game 90-69 as Sendai shook up the lineup.  Expansion team Cinq Reves won Saturday against the Niigata Albirex BB,71-68, but fell to 2-2 Sunday with an 80-57 loss.  Fukuoka Rizing split its series with the Hamamatsu Higashimikawa Phoenix, losing the first to the Phoenix 76—72, but bouncing back with a 106-96 win on Sunday.  It was the Rizing’s first win of the season.

The Akita Happinets made the season debut of expansion team dismal indeed, dumping the Gunma Crane Thunders 98-60 and 100—57 to push the new squad to 0-5.  The Saitama Broncos picked up their first win of the season over the Shinshu Brave Warriors, 94-82.  The Brave Warriors rallied Sunday, outdistancing the Broncos 82-68.  The Iwate Big Bulls scored a big pair of wins over the Chiba Jets to remain unbeaten this season, squeezing out a 788-77 win in the first game, and having to go to overtime for  a 99-88 win on Sunday.