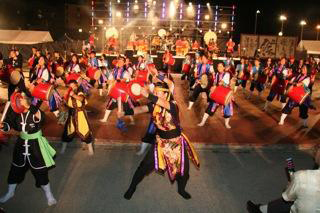 The finale of the 2-day event is in Onoyama Park stadium.

For many, the center of the Okinawa universe on Saturday and Sunday will be Kokusai Street, Okinawa’s international street that’s the focal point of a massive parade part of the Shuri Castle Festival.

Many stages will be held, like eisa, yosakoi souran, ballet, and dance shows. On Sunday, the Shuri castle picture scroll will be performed in front of a large crowd of spectators. Followed by a parade of a procession of portable shrines, the III Marine Expeditionary Force marching band will perform. After that, everyone comes to Onoyama athletic field for the contest of leaders. From there, the day becomes a huge exchange meeting as a grand finale. In exchange meeting, wonderful stages like wadaiko, sishimai (lion dance), eisa, dance show, and a David Ralston band performance will be held. 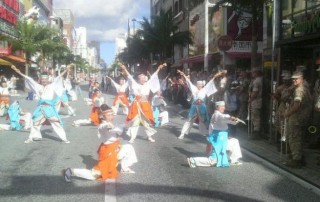 The main themes of this festival are representing traditional folk entertainment of the region, and holding events that inhabitants of Okinawa prefecture and people from other countries enjoy. 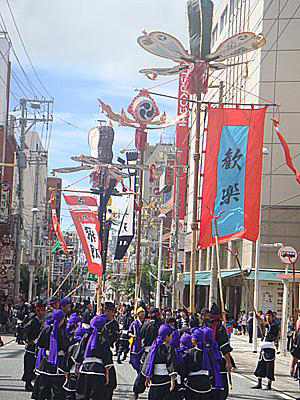 Colorful flags and banners, “hatagashira” take part in the parade, too.

Worldmore consists of many performances which come from both inside and outside of Okinawa Prefecture. Audiences will enjoy the stages of dance and movement that are performed by performers who wear great individualized costumes. Those performances will be held at each intersection point on Kokusai Street.

Yosakoi Soran: A style of Japanese festival based on dance, and it originates from Kochi Prefecture, and became famous in Japan around 2000s.

1) Performers have a musical instrument like percussion during dancing.

2)  BGM is usually traditional folk song of each region or arranged songs.

(Jazz, hip hop, and disco arrangements are popular.) The length of each song is usually about 5 minutes.

3) Usually, performers arrange something like a stage of Kabuki, Japanese traditional dance, or ballet.

4) Performance is based on group dancing, and performers produce each choreography by themselves. 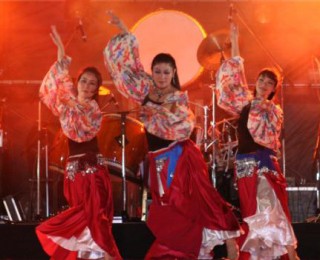 David Ralston and his band will perform on Sunday in the exchange meeting as part of the grand finale at Onoyama Park.