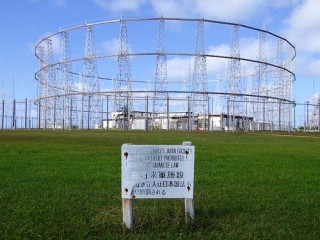 The last of so called ‘elephant cage’ antennas are heading for scrap yard in Misawa, as similar structures on Okinawa were demolished in 2007.

Five years after the Elephant Cage antennas array at Yomitan in Okinawa were shut down and destroyed, plans after been announced to scrap its twin at Misawa Air Base in northern Japan.

The massive antenna system –dozens of 37-meter-high antennas aligned in a 440—meters in diameter circle— has been in operation since March 1965, tracking and intercepting radio transmissions.  The Air Force says the Elephant Cage antennas will be scrapped after operations are terminated.  “The primary purpose of the arrays during the Cold War was to receive and locate high frequency radio transmissions,” says an Air Force official with the 35th Fighter Wing at Misawa.

The Elephant Cage arrays could track radio transmissions from any angle.  Between the two systems, about 2,000 people worked at each complex, although that number has dropped to 500 at Misawa.  The second Elephant Cage system was eliminated when the communications facility in Yomitan was turned back to Japan in 2007.  That site was also destroyed after 41 years in use.

In the 1980’s, new domed antennas have been constructed at Misawa that reportedly function as the Elephant Cage’s successor, intercepting data transmitted from communication satellites.  Nineteen of the large, golf ball-shape antennas are now in service.