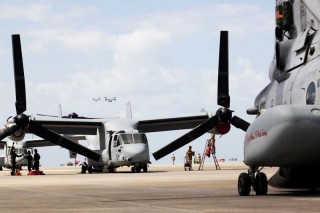 The first squadron of twelve MV-22 Osprey are now all in their home base of MCAS Futenma as the last three flew in from Iwakuni on Saturday. The aircraft landed at the Okinawa base just before 3 p.m.

The Marine Corps say that a second squadron will be deployed by 2014.

The deployment of the Osprey aircraft is meeting fierce local resistance as the public and local politicians have taken an issue with the safety of the Osprey. Adding fuel to the fire, opponents of the deployment claim that the strict operation rules agreed to in negotiations between the Marines and the Japanese government officials, have already been broken. Specifically, they claim that witnesses have observed the aircraft flying over urban areas in the helicopter mode when the rules call for such flights to be restricted to airspace over the U.S. military installations.

The Marines are reportedly planning to conduct landing practice on the auxiliary airfield on Ie Island, and low-altitude training and landings in the Marines’ Northern Training Area.  They will also fly to Kadena Airbase to replenish their ammunition.

In addition, the Osprey squadron will train low-altitude flight at MCAS Iwakuni and Camp Fuji in Shizuoka Prefecture in mainland Japan, supposedly two or three days a month.

Okinawa Governor Hirokazu Nakaima is scheduled to hold talks with Prime Minister Yoshihiko Noda in Tokyo, Tuesday. He is traveling to Tokyo to demand the withdrawal of the Ospreys from Okinawa.