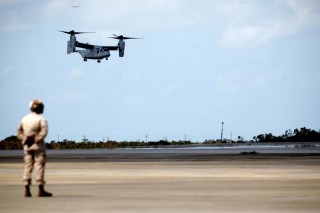 Six MV-22B Osprey aircraft flew from Marine Corps Air Station Iwakuni and arrived at MCAS Futenma on Monday, the first element of two squadrons to be based on Okinawa.

Squadron aircraft will continue arriving to MCAS Futenma over the next few weeks. Marine Tiltrotor Squadron 265 (VMM-265) is part of Marine Aircraft Group 36, 1st Marine Aircraft Wing, III Marine Expeditionary Force.  The MV-22 aircraft are based at, and will operate out of MCAS Futenma. Upon arrival at MCAS Futenma the aircraft and aircrew will begin conducting, regularly-scheduled routine training.

The MV-22 will use both established fixed-wing and rotary wing traffic patterns and local operating procedures for arrival and departure of MCAS Futenma to ensure safe flight operations in bilaterally approved areas.  The MV-22 has an excellent safety record, as it ranks among the very safest of all U.S. military aircraft when reviewing the key metric of the first 100,000 hours of flight.

The Marines have consistently said that ‘basing the MV-22 Osprey in Okinawa will significantly strengthen the United States’ ability to assist in the defense of Japan, perform humanitarian assistance and disaster relief operations, and fulfill other Alliance roles.  A Marine Corps official says “Our most valuable relationships are with our community neighbors – we consistently do our utmost to keep our community safe, and will continue to do so as MV-22 Ospreys arrive in Okinawa.”