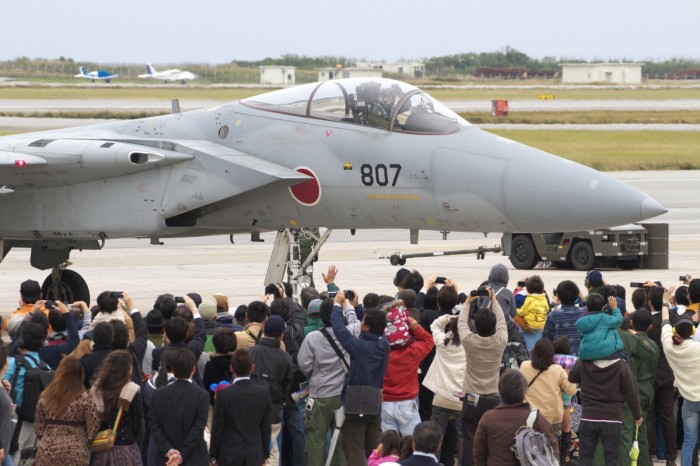 Some 20,000 visitors are expected to Naha Air Base to take a peek at JASDF equipment and activities on Sunday.

Naha Air Base, the hub of Okinawa aviation, celebrates its 40th anniversary this weekend with an Air Festival, although in reality, the airport’s been serving the island for decades more.

Japan’s Self Defense Forces now at Naha Air Base were located here in 1972 at the time of Okinawa’s reversion to Japan, sliding into position at the joint military-commercial airfield to replace the departing U.S. Air Force.  In the four decades since, the airport, which goes by a combination of names to include Naha Air Base and Naha International Airport, has served Okinawa well, supporting the Japan Self Defense Forces, Okinawa Prefectural Police Department Fleet, and the Japanese Coast Guard. 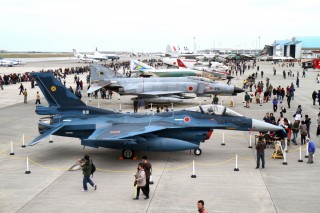 Just about every aircraft in JASDF inventory is on display during the Air Festival.

The airport is the fourth busiest airport in Japan, and is earmarked for expansion in the near future by the Japanese government.  A second runway, a much improved international passenger terminal and expansion of the domestic terminal are all said to be part of the master plan for making the airport capable of supporting Okinawa’s needs in the decades ahead.

Naha Air Base served the U.S. forces throughout the occupation era from the end of World War II to 1972, and much of the remaining base still bears the U.S. architectural styles  on buildings.  However, that’s not the real beginning of the Naha  Airport story.

The long history of Naha Base as a military installation is in evidence, including this artillery piece that last saw action during the Battle of Okinawa in WWII.

Today, Naha Air Base is a burgeoning civilian aviation facility, struggling to support the ever-growing tourism and business development in Okinawa.  At the same time, it is home to the Japanese Air and Maritime Self Defense Forces, who operate everything from P-3 Orion ocean surveillance aircraft, helicopters and F-15  jet fighters from the flight line.   On the commercial side, Naha Airport’s domestic services encompass Japan Air Lines, Japan Transoceanic Airline, Ryukyu Air Commuter, All Nippon Airways, and Skymark.  The international terminal supports China Airlines, Asiana, China Southeastern, Hong Kong Express and others.

The airport’s 3,000-meter runway (9,843 feet long) is used by nearly 200 flights a day, and is the hub for service across Okinawa Prefecture. The airport is overloaded and subject to congestion at peak periods of the day.

This weekend more than 20,000 spectators are expected to flock to Naha Air Base to share in the friendship activities being promoted by the Japan Self Defense Forces.  Hiroshi Takara of the Naha Air Base press office says the local future goal is 80,000 spectators, which is what a mainland air base festivals attract.

On display this year will be almost all air combat aircraft operated by the JSDF, including F-15 fighters, T-4 trainers, UH-60 and CH-47 helicopters, P-3C patrol aircraft, and F-4 fighters.   Aside from the static displays, there will also be an air show, but because of the Great Tohoku Earthquake and Tsunami in March 2011, the acrobatic show by the Blue Impulse has been canceled.

As with all festivals, there will be plenty of food and entertainment booths.  Free shuttle busses run from Naha Military Port to Naha Air Base, so people can park at Naha Military Park and take the bus.  Naha Air   Base is also close to the Yui Rail Akamine Station.  For kids, there’s a stamp rally, meaning kids who collect 10 stamps at aircraft   and static equipment displays earn free gifts from Naha Air Base.