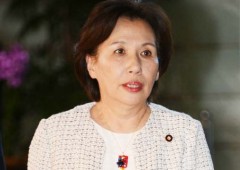 Prime Minister Yoshihiko Noda has opted for a Beijing-friendly woman in his Cabinet as he shuffles people around in hopes of buoying his shaky public persona.

Although he picked an unknown as finance minister, he chose Makiko Tanaka as Education Minister.  She’s the daughter of former Prime Minister Kakuei Tanaka, who normalized the diplomatic relationship with Beijing four decades ago.  She is well thought of in China and has maintained solid ties with the country.  Tanaka was in Beijing only last week as part of a parliamentary delegation.  She briefly served as foreign minister under Prime Minister Junichiro Koizumi.  He sacked her in 2002.

Noda kept Foreign Minister Koichiro Gemba and Defense Minister Satoshi Morimoto, and brought in Seiji Maehara to handle national strategy, saying he wanted Maehara “to use his ability to develop strategy for reviving Japan and to implement economic measures as commander of the entire government.”  Finance Minister Jun Azumi was ousted in favor of an unknown, Koriki Jojima, at the reins of the world’s third largest economy.