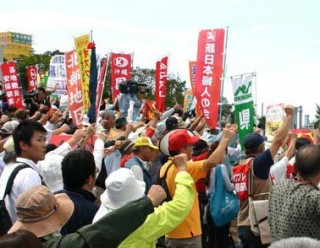 Okinawa residents wasted no time mobilizing supporters to oppose the arrival of the MV-22 tilt-rotor Osprey aircraft, mounting a series of blockades around all three gates to Futenma Marine Corps Air Station.

Barricades of cars parked in front of the base’s Nodake gate began last Thursday evening, halting vehicle traffic into and from the base.  Despite Typhoon Jelawat’s arrival over Okinawa Saturday morning, the Osprey opponents expanded their blockade to all three gates into Futenma.

On Sunday afternoon they parked vehicles in front of the Oyama and Samashita gates, eventually completely blocking vehicle traffic to and from the airbase.  Local residents are incensed over the Japanese government’s approval of deployment of the Osprey, with the first squadron of 12 aircraft slated to arrive within days.

Residents moved four vehicles in front of the Oyama gate around 4:25 p.m., with the number increasing to 11 by 5 p.m., prompting about 50 Japanese police officers to be dispatched to the site to warn them to move the vehicles.