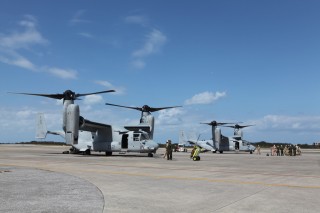 The first full squadron of 12 MV-22 Ospreys are now all in Okinawa, and have started conducting training operations in the area. (USMC. photo by Lance Cpl. Mike Granahan)

The MV-22 Ospreys have only been on Okinawa less than two weeks, but already the flight operations coordinators are getting them ready for workouts on Okinawa, and on the mainland.

The first dozen Ospreys, which were initially taken to Iwakuni Marine Corps Air Station while details of their Okinawa deployment were worked out, and then test flights accomplished, are all now at Futenma Marine Corps Air Station.  A second squadron of 12 Ospreys are due to arrive in Okinawa in the near future.  The two squadrons of Ospreys will replace the aging CH-46 SeaKnight heavy lift helicopters that have been the Okinawa workhorses since the Vietnam War era.

The Marine Corps says it will be dispatching several of the Ospreys to Iwakuni, and to the U.S. Camp Fuji in Shizuoka Prefecture every month to conduct low-altitude flight training over Honshu, Kyushu and Shikoku.  With Kochi Prefecture on one of the planned routes for flight training, that prefecture is continuing to oppose the MV-22 deployments.

On Okinawa, the Ospreys are already learning their way around the area, including an initial run to Ie Island on the northwest side of the island.    For now, the bulk of training is between U.S. military complexes, while pilots become proficient in making the transitions from helicopter to aircraft, as required for all off-base operations.

Military officials say they expect full operations for the new Ospreys to be in place before the end of October.