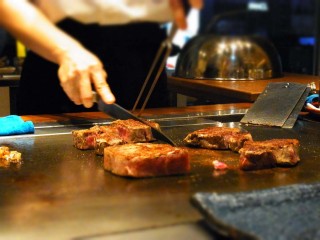 Steakhouse heki, famous for being run by an entirely female staff, is seeking to list on the Tokyo Pro Market stock trading section as the first company from Okinawa.

An Okinawan teppanyaki-style steak restaurant chain has set its eyes on public listing on Tokyo Pro Market in March next year. This is a part of Okinawa Pregecture government’s effort to help local start-ups to go public.

Heki, which is known for being run by all-female staff, has currently two teppanyaki steak restaurants on Kokusai Street in Naha and one in Omoromachi, plus Restaurant Torihiro in Matsuyama that specializes in pot dishes based on chicken, Okinawan Aguu pork and locally grown fresh vegetables.  Heki also has a restaurant in Tokyo on the 12th floor of Mitsukoshi Department Store in Ginza.

The restaurant chain is the first of a few companies the government hopes to get listed on the Tokyo Stock Exchange  Pro Market trading section that is solely aimed at professional investors, officials say.

Heki, with the help of Okinawa J-Adviser, which was founded by Okinawa Industry Promotion Public Corp. and local financial institutions, is aiming at listing on Tokyo Pro Market that has easier listing rules.

Officials say several other companies besides heki are watching keenly how the project proceeds with an idea of following suit if everything turns out to be a success.