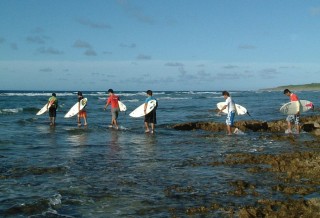 Surfers are gathering for Itoman Mayor’s Cup competition at Komesu coast where the surf should be good this weekend due to recent typhoon Prapiroon.

The event at the Komesu sea coast is attracting plenty of attention as surfing becomes a more popular sport, largely because it’s easy to watch at a good many Okinawa locations.  It’s now a parent-child sport, with plenty of surfer families taking to the waves, and some professional surfers are Okinawan and attracting media attention around the world.

The Okinawa surf rider confederation is holding surf contests to let surfers know what’s happening in Okinawa.  They’re teaching surfers how great the Okinawa ocean environment is, while promoting the rules and manners expected of surfers.  Always foremost,  says the confederation, is promotion of skills and safety.