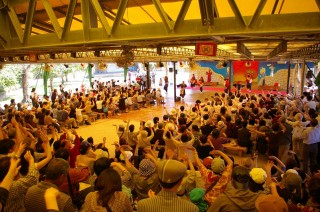 Although the number of tourists is increasing, typhoons and trouble with China over Senkaku islands are putting brakes on Okinawa’s tourist trade lately.

Officials at the Okinawa Prefecture Culture, Tourism and Sports Division cautiously optimistic when, on October 15, they announced numbers of tourists who visited Okinawa during the first half of the year 2012 from April through September.

Last year, the number decreased significantly because of the effects of the Great Tohoku Earthquake and Tsunami, but the number still shows a 3.1% decline compared to the first half of 2010.

Officials pointed out that the number of visits from mainland Japan was adversely affected by typhoons, and increased rivalry from destinations within Japan. Also, a factor is that a growing number of people choose to vacation overseas because the strong yen makes overseas travel competitive in prices.

Officials had feared that the strong yen would affect the number of tourists from overseas more but, the numbers showed a large increase, mainly because of an increase in airline services from the Chinese mainland, Taiwan and Korea, and port calls of large cruise ships from Shanghai.

Forecasting the future numbers of Chinese tourists is difficult as the division officials pointed out the effects of the recent nationalization of the Senkaku Islands.

They concluded that a low-level progress can be expected because the number of Chinese tourists sees a slower growth, and political circumstances between Japan and China are still murky.

A division official said, “The number is depressed by the effects of typhoons, and Senkaku problems, but the Okinawa prefecture’s promotion efforts are producing results including an increase in airline services from Korea by Asiana Airlines. We will increase our efforts to develop new markets such as Thailand, Malaysia and Singapore.”

On the other hand, the number of tourists visiting Okinawa in September decreased 2.1 % (507,300 people) compared to September last year, and fell below the preceding year’s results for the first time in eight months. This was because of cancellations of tours from China due to the effect of Senkaku problems, and the added effect of typhoons 16 and 17 that both hit on weekends.

However, the number of tourists from overseas increased 1.2 % (32,500 people) in September because the number of flights from Taiwan almost doubled from 14 to 25 a week.