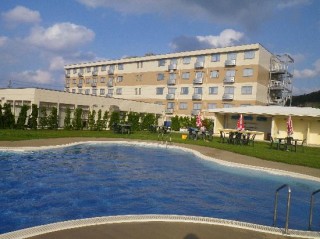 Former Island Resort Yonaguni has been reborn as Island Hotel Yonaguni with lesser amenities and costs.

A Yonaguni Town hotel that went out of business a few months ago has reemerged with new owners and a new name, Island Hotel Yonaguni.

The new hotel opens October 29th.  By removing the ‘resort hotel’ moniker, owners say they’re trying to streamline management and try to improve business as a lodging specialization hotel. The hotel’s owned by Ryukyu Nissan Group Island Resort Development.  The reception area of the hotel has already been reopened to promote new business.

Island Hotel Yonaguni has 77 guest rooms.  It is capable of accommodating 247 guests.  For the reopening, the owners have closed the spa facility and outdoor pool, and will serve only breakfast in the restaurant.

“We will put our effort into attracting customers by strengthening our lodging appointment website on the internet, and collaborate with the local tourist association,” says the company spokesman.  Island Resort Yonaguni was opened as the first resort hotel in town in May 2008.  It slid into deficit because of the high costs of operating a resort facility on an isolated island, and the slow development of a customer base.