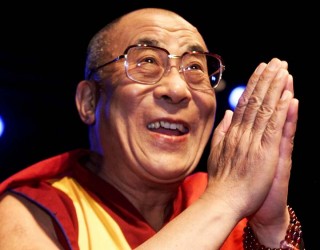 The venerable Dalai Lama will make a one day visit to Okinawa Sunday to deliver a lecture at the Budokan and to pray for the war dead at Memorial Peace Park.

The Okinawa visit will be the second for the 14th generation Dalai Lama.  He visited in August 2009 as part of a Japan visit.  The Dalai Lama, born in Tibet, a country China now claims as a southwest district of its own, is now 75, having taken the throne in 1940 before being forced to flee Tibet following a 1959 civil uprising.  The Dalai Lama has been in exile in India with other priests who fled Tibet, teaching Tibetan people self-government and about establishing a new government in Tibet.

The Dalai Lama will speak on “The strength to overcome difficulties and talk to future younger generations.”  The lecture begins at 1:30 p.m.  Tickets are ¥5,000 for A-seats, while B-seats are ¥4,000.  S-seats are already sold out.  Tickets are available at the Ryukyu Shimpo main office today and tomorrow until 5 p.m., at the Okinawa Dalai Lama Invitation Committee, and from Family Mart convenience stores’ e-Plus.

After visiting Okinawa, the Dalai Lama is scheduled to give a speech at Japan’s lower house members’ office building on Nov. 13. A bipartisan group of lawmakers is hosting the event.

The Chinese government has protested the Dalai Lama’s visit to Japan accusing Japan of “offering the Dalai Lama a place for his separatist activities, and conspiring with anti-China groups to damage relations between China and other countries.,” according to China’s Foreign Ministry Spokesman Hong Lei.

Meanwhile, the Dalai Lama, who is currently in Yokohama, said, referring to the dispute between Japan and China over the Senkaku Islands, that leaders and people on both sides should take a “broader view” on the subject. “The same applies to Japan and South Korea,” he added.

The Dalai Lama’s liaison office for Japan and East Asia say this visit will mark his 14th trip to this Asian nation.  He’s told the world he is against fighting, and always talks and negotiates. The Dalai Lama was awarded the Nobel Prize in 1989 for his active stance against violence.