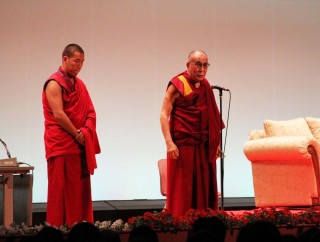 The Dalai Lama’s tour included a visit to Himeyuri Memorial Museum after a prayer and tree planting ceremony at Kompaku Monument.

Peace and prayers were at the top of the Dalai Lama’s activities during a weekend visit to Okinawa during which he spoke to a gathering of 3,500.

A soggy Sunday morning found the venerable Dalai Lama in Itoman City, where he visited Konpaku Monument to pray for victims of World War II.  He also performed a tree planting ceremony at the monument, the first memorial build by Okinawans following the end of World War II.

A speech to 3,500, including 645 students invited free, was the afternoon highlight at the Okinawa Budokan in Onoyama Park in Naha City.  The Dalai Lama preached that  the significance of existence is making cross-fertilization of various religions of the world a reality.  He called upon listeners to understand each religion and make harmony of differences, saying each religion originally preached the same things.

The Dalai Lama explained that hoping for others’ happiness makes your own happiness, and said universal thinking is universal happiness.  He encouraged visitors to respect other religions, telling them he’s studied what actual happiness is with some famous American universities.  Think not “me” he said, but rather, think “us”.  Being happy yourself is the key to making others happy.

The visiting 14th Dalai Lama took the U.S. military to task during the visit, declaring the foreign military bases are “not right” to be located in Okinawa.  Unfortunately, though, he noted such situations exist in the world that necessitate prefectures like Okinawa to host American bases.  His singular comment about the criminal allegations against U.S. servicemen arrested in the past month was that they should be punished under the law.

The Dalai Lama called on China and Japan to work together to handle the issue of the Senkaku Islands in the East China Sea, saying “China needs Japan.  Japan needs China.  That’s the reality, and that’s more important.”  China has laid claim to the Japanese-controlled islands in southern Okinawa Prefecture.

This was the second Okinawa visit in three years for the Dalai Lama.  He visited the Himeyuri Peace Museum in Museum, a memorial hall for the ground battles during the World War II Battle of Okinawa.