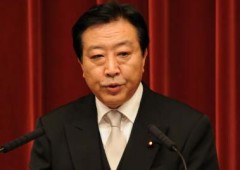 Japan’s Diet is now in special session, and the lawmakers were in a testy mood as they refused to allow the Prime Minister to even make a speech.

Prime Minister Yoshihiko Noda was shunned by the Diet, which signaled their displeasure with him and his Democratic Party of Japan’s policies by not allowing his policy speech.  On top of that blow, Noda received word of defections from the DPJ by two lawmakers.  Those politicians left the DPJ-Kokumin Shinto, the People’s New Party,  coalition tossing that political body into its own state of chaos.

The defections bring the DPJ perilously close to losing its majority in the chamber, and that could allow the opposition camp to pass a vote of no confidence against the Noda Cabinet that would force him and his team to either resign together or dissolve the house and call snap elections.

Noda’s already made clear he has no intention of calling a special election, telling reporters earlier this week he has unfinished business for the country.  The prime minister has also vowed to work more closely with the Bank of Japan to support the economy.  His cabinet approved a ¥423 billion fiscal stimulus plan only a week ago, but economists are saying it’s too small to help the country very much.  Economists say the stimulus plan has heaped more pressure on the Bank of Japan.

Noda says he wants to work with the Diet to pass a bill capable of funding the  ¥38.3 trillion budget deficit, but there are no signs the opposition is willing to cooperate.  Noda’s stature with the upper house is shaky, with the prime minister having been target of a non-binding censure motion passed in the last parliament session.

The current extraordinary Diet session is slated to run until November 30th, but unless Noda can make accommodations with the opposition, the government could run out of money before then.  That would trigger a “fiscal cliff” of radical spending cuts that would push the economy to recession.  “No government can manage the current public finances without the bill,” says Noda as he appealed for opposition support.  “If the situation is left as it is, administrative services could stall, which would seriously affect people’s livelihoods and thwart efforts to revive the economy.”