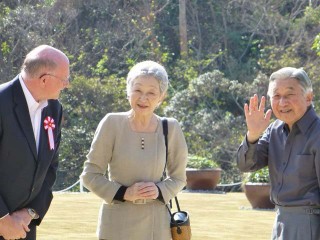 Emperor Akihito and Empress Michiko are back in Tokyo following a four-day whirlwind visit to Okinawa.

The Imperial Couple arrived in Naha Saturday, visiting first the Peace Memorial Memorial Park in Itoman, where they met with surviving members of the Shiraume student nurse corps.  The student nurses corps was mobilized for the 1945 Battle of Okinawa.  The Emperor and Empress laid flowers for the war dead.

They joined in a national convention on healthy oceans and marine resources on Sunday.  While in Itoman they also participated in the release of coral larvae and shellfish into the ocean.  Monday took the Royal Couple to the Okinawa Institute of Science and Technology in Onna, which opened in September.

Tuesday the imperial travels moved the couple to Kume Island for a visit to the Okinawa Prefecture Deep Sea Water Research Center.

This was the Imperial Couple’s ninth visit to Okinawa.  Their first visit was when they were Crown Prince and Crown Princess.