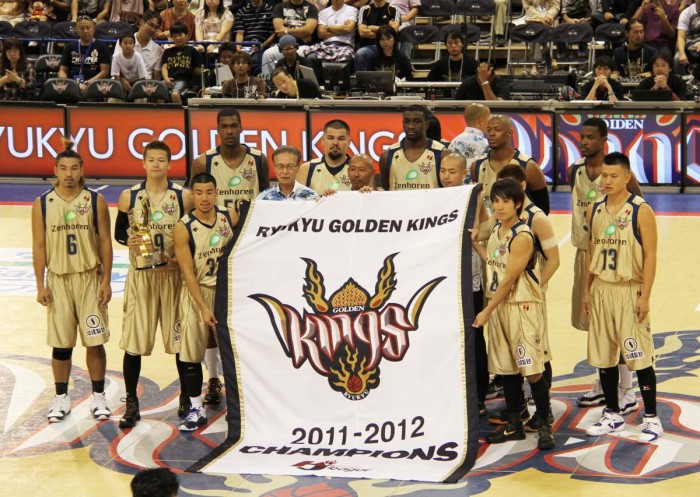 A ceremony was held at the beginning of Saturday’s game to honor the Golden Kings for the 2011-2012 Championship.

The defending Basketball Japan League champion Ryukyu Golden Kings haven’t lost any of their 2011-2012 touch, kicking off this current campaign with a first six games winning streak that stretches from mainland Japan to the home courts in Okinawa. 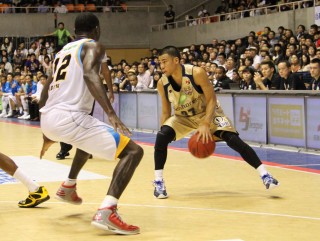 Narito Namizato racked up 33 points in Sunday’s game, which the Golden Kings won 90-69, while the team had won Saturday’s game 79-68.

The latest victims were the Shiga Lakestars.   Okinawa City was the venue for the Golden Kings’ first weekend win, sliding past the Lakestars 79-68 behind the play of Anthony McHenry.  McHenry, the reigning playoffs MVP, fired 23 points while hauling in nine rebounds and scoring four assists and three steals.

Narito Namizato, who’d been instrumental in Saturday’s comeback win, was the Okinawa star Sunday, racking up 33 points in a 90-69 win.  McHenry was close behind with 31.

A team member really happy to be present was Shigeyuki Kinjo, who’d synonymous with the Golden 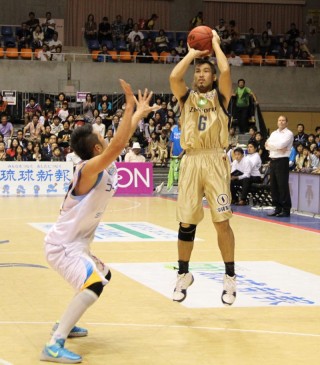 Shigeyuki Kinjo returned to the court after recovering from an injury in 2009.

Kings victories and 2009 championship.  Seriously injured at that time, there were doubts he’d ever return to basketball, and says he sometimes thought he should quit the game altogether.  To the amazement of Okinawa fans, he regained health and rejoined the Golden Kings, where he’s again practicing his specialty of shooting 3-pointers.

Elsewhere in the BJL, the Iwate Big Bulls soared into triple digits twice as they swept the visiting Gunma Crane Thunders 102-67 and 105-89.  The winless Crane Thunders are now 0-7, having lost their last three games by a combined 116 points.  The Niigata Albirex BB were also two-game winners, outscoring the visiting Yokohama B-Corsairs 78-75 and 69-65.

The Hamamatsu Higashimikawa Phoenix recorded a two-game sweep over the Shimane Susanoo Magic, handing the visitors their first two losses of the year.  The Phoenix won 99-86 and 85-70 to go 5-3 on the young season.  The Brave Warriors outdistanced the Chiba Jets twice over the weekend, 83-76 and 85-71, dropping Chiba to 1-5. The Jets, now in their second season, have announced plans to defect to the rival Japan Basketball League, which will be called the National Basketball League next season.

The Oita HeatDevils, who are set to face the Golden Kings November 10th and 11th in Okinawa, beat up on the Miyazaki Shining Suns this past weekend, hammering out 96-84 and 94-76 victories over the host squad.  Fukuoka Rizing, meanwhile, racked up 92-84 and 79-77 wins over the Kyoto Hannaryz.  The wins even the Rizing record at 3-3, while Kyoto remains winless at 0-6.