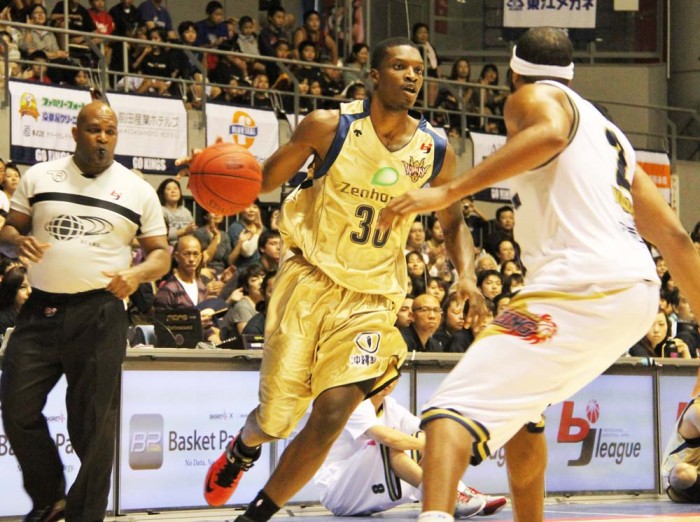 Terrance Woodbury on the offense; he scored 13 points in Saturday’s game and doubled that to 26 points on Sunday, and earned the bj-League November MVP of the month.

Okinawa’s Ryukyu Golden Kings are riding an unparalleled winning streak in the Basketball Japan League, pushing their record to 12-0 with a pair of weekend victories over the Rizing Fukuoka.

The red-hot Okinawa squad zipped past the Rizing 80-71 and 81-75, pushing the mainland squad down to an 8-6 record.  Dzaflo Larkai stepped into the ailing Jeff Newton’s shoes –he was sidelined for the weekend—and tallied 19 points and five rebounds Saturday and five points plus 13 rebounds on Sunday.  Terrance Woodbury was in top form as well, scoring 13 points while picking off six rebounds Saturday, then doubling his scoring to 26 on Sunday while grabbing another six rebounds.

Head coach Koto Tohyama is happy with the win streak, but says he’s not satisfied yet because the team’s not playing to their potential. “The games for this weekend remind us the style of play is getting rude, and we’ve found teams’ bad things now, so adjust the way we play and step up for the next stage,” he says.  Tohyama believes “our squad is the team that does self-research, and that’s why we’re stretching our record.  The test will be this weekend on the road, when Okinawa goes against the Oita 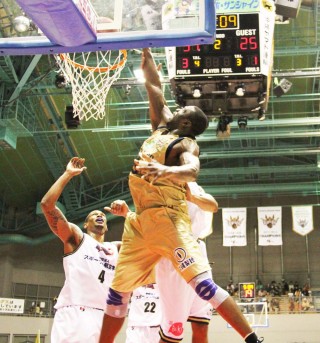 Dzaflo Larkai was able to step into Jeff Newton’s shoes scoring 19 points on Saturday and five more on Sunday.

It was an unbelievable weekend for the Miyazaki Shining Suns, who are off to a terrible start this season, winning their first game on October 13th and then losing the next 12.  Many of those were lopsided losses, so Sunday’s rare victory over the Oita HeatDevils Sunday, 86-75, was a cause for celebration.  Oita had won the first game in the series, 77-72.   As Miyazaki improves to 2-12, Oita slides to 9-5 as they prepare to host the Ryukyu Golden Kings this weekend.

The Shiga Lakestars and the Hamamatsu Higashimikaawa Phoenix duked it out, splitting their series.  The Lakestars drew first blood 78-69, but the Phoenix Sunday took the game 77-72.  The Phoenix are now 9-7 while the Lakestars are 8-6.  The Toyama Grouses and the Niigata Albirex BB also split a series, the Albirex BB winning 88-76, then losing 81-70 in a pair of Eastern Conference rivals clashes.  Niigata’s now 9-5 while Toyama is 9-7.

The Kyoto Hannaryz are on a roll, extending their win streak to six games with a pair of wins over the struggling Takamatsu Five Arrows.  Kyoto, itself struggling, has pulled itself to a somewhat respectable 6-8 record after a losing start, taking the first game 80-69 and Sundays matchup 98-88.  The Shimane Susanoo Magic are feeling pretty good after knocking off the Osaka Evessa 82-77 and 87-84 to push their record to 8-6.  The Evessa, long a powerhouse winning three championships in the league’s first three seasons, are now 1-9, their worst ever season start.

The Yokohama B-Corsairs struggled and lost a nip-and-tuck battle with the Iwate Big Bulls, 89-84, in a game at home Friday night, but bounced back to sweep the Eastern Conference leading Big Bulls 98-61 in the second game on Saturday.  The Big Bulls fall to 11-3 while Yokohama’s now 7-5.  The Shinshu Brave Warriors hammered Tokyo’s expansion team, the Cinq Reves, beating up on the newcompers twice, 84-73 and 89-82.  The Nagano Prefecture squad is now 9-5, while Tokyo’s 5-9.

The Sendai 89ers roared to victory over the Gunma Crane Thunders, not once, but twice in a series in Oizumi, Gunma Prefecture.  The 89e3rs won 107-79 and 71-56 to improve to 5-7 against the cellar-dwelling Crane Thunders, who are 1-15.  The Akita Northern Happinets split their series with the Chiba Jets, winning 88-73 before falling Sunday, 88-74.