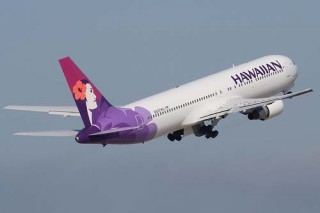 The aloha spirit is invading Japan as Hawaiian Airlines inaugurates flights between Honolulu and Sapporo.

The new initiative has full support of the Hawaii Tourism Authority, which predicts it will add 41,000 new air seats to the market and benefit Hawaii’s visitor industry.  Hawaii’s tourism economy is expected to generate an estimated $61 million in annual visitor spending, while at the same time dumping $6.7 million into state coffers in form of tax revenues.

The new route will be served by wide-body twin-aisle Boeing 767-300ER aircraft.  The planes will seat 264 passengers, including 18 in Business Class.