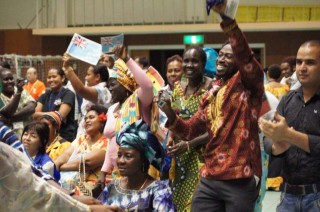 JICA International Center students represent nationalities of developing countries from all over the world who come to Okinawa for training as a part of Japan’s international assistance program.

This year’s theme is “From Uchina to the stage of the world: the challenge to the future and the creation of biding”.  The promotion began a month ago as the starting point coinciding with the 40th anniversary of Okinawa’s reversion to Japan, and also the beginning of the 5th Okinawa Promotion Plan.  Okinawa Prefecture’s formulated itself, combining the starting points and an Okinawa 21st Century Vision on how to best tackle policies for the coming decade, using the worlds ‘challenge’ and ‘creation’ as part of the basic policy.

The prefecture determined that the approach to ‘creation’ meant a “many-sided exchange and cooperative relations in the new world’, toward ‘active participation to the world’, and that got JICA going.  JICA says the catchphrase and decisions being executed means Okinawa “Flutters in the world and builds relations with the world with the preciousness of this island.”

On both Saturday and Sunday the Exchange Festival runs 9:30 a.m. ~ 6 p.m., at the JICA Okinawa International Center.  Many events will take place both days, beginning with dance and fashion shows from each country on Saturday, aided by overseas training members of JICA.  Organizers call this a routine occurrence at the festival, as it’s a big chance to promote cultural exchange with foreigners visiting and living in Okinawa.  On behalf of Okinawa, the “Maeda Eisaa” appears from Maeda in Urasoe City, home of the local JICA Okinawa International Center. 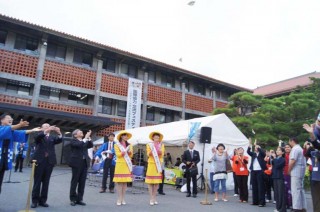 The opening ceremony taking place on Saturday at 9:30 a.m. kicks off the festival.

To get to the JICA International Center, take Highway 58 south to Camp Kinser Gate 3, then turn left at the traffic light outside the gate.  Continue straight past the Urasoe City Offices, and through the next intersection.  At the traffic light just after the Urasoe Police Station, turn right.  The International Center, a group of red brick buildings, is on the left by a hill before the road enters a tunnel.