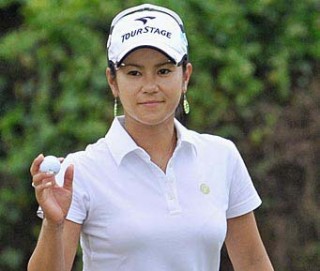 Ai Miyazato was not able to get her putter to work on the final round of the Titleholders Tournament.

Ai Miyazato was off to a good start at the Titleholders Ladies Professional Golf Tournament, holding a one-stroke lead at the midway point before losing concentration and winding up fifth in the final tournament of the season.

Miyazato was only a shot behind the winner Choi Na Yeon of South Korea at the Naples, Florida tournament, when the final round began, but she couldn’t make her putter work and she ended the LPGA season with a 9-under 279.  It took her 32 putts to play the round in which her three birdies were overpowered by five bogeys.

“I couldn’t get a good rhythm on the front nine,” says Miyazato, who was shooting for her third victory of the year.  “I was having trouble reading the lines on my putts, so even ending in fifth place in the final tournament of the year is a good stance.” The Okinawa native says “I’ve found many things that I have to work on for next year, but overall, two title wins made this a very good year for me.”