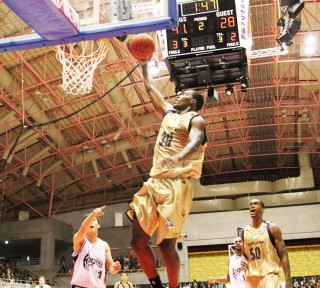 Terrance Woodbury scoring one of his 22 points on Sunday.

The Ryukyu Golden Kings like being on a roll, and now that they’ve topped last year’s undefeated season start and are 10-0 after upending the Oita HeatDevils, they are thinking the sky’s the limit.

Okinawa’s atop the Western Conference standings at the moment, and are looking for more wins this weekend.  In 2008-2009 and again in 2009-2010, the squad went 9-0, which they’ve topped.  Now they’re looking for more in the double digits.  Saturday was a struggle at times for the Kings, who trailed by 9 points at one point in the third quarter before pulling it out in the final seconds on a three-point at-the-buzzer shot by Narito Namizato to win 85-82.

A crowd of more than 2,800 was at Okinawa Municipal ?Gymnasium for the contest, which saw University of George star Terrance Woodbury, who joined the Golden Kings during the off season, rack up 23 point, going 10 of 14 with a pair of three-pointers.  Naoto Kosuge scored 15, Anthony McHenry 13 plus 13 rebounds, three assists and three steals.  Narito Namizato and Jeff Newton each picked up 10. 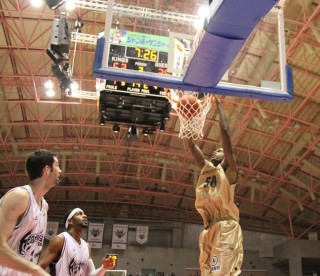 Jeff Newton scores one for the Kings.

The boys wearing gold made an easier time of it Sunday, coasting to a 98-78 win behind Anthony McHenry’s 28 points, 13 rebounds and five assists.  Terrance Woodbury added another 22, while Narito Namizato scored 17 and Naoto Kosuge 11.  For Okinawa’s new coach,  Koto Toyama, it’s been a great transition to Okinawa.  As Okinawa sits atop the league standings, Oita fell to 8-4, tied with the Rizing Fukuoka.

Tokyo’s Cinq Reves moved to 5-7 in league action with a mid-week win over the visiting Gunma Crane Thunders, 65-63.  The Thunders are now 1-13.  The Hamamatsu Higashimikawa Phoenix glided to a 93-82 win on Friday over the host Takamatsu Five Arrows, but lost 72-69 on Saturday.  The Phoenix, playing their first season in the Western Conference, are now 8-6.

The Sendai 89ers and Yokohama B-Corsairs split a pair in Kesennuma, Miyagi Prefecture, with the 89ers winning the first game 87-84, before losing 95-78 on Sunday.  It was an emotional series in the region, which was devastated by the Great East Japan Earthquak and tsunami on March 11, 2011, and is now coping with major reconstruction.  Sendai’s now 4-6, while Yokohama’s even at 5-5.  The Kyoto Hannaryz pulled off a pair of wins over the Miyazaki Shining Suns, plunging Miyazaki to a 1-10 record.  Kyoto won 88-85 and 101-87 to push their record to 4-8.

Rizing Fukuoka also recorded a pair of wins, outdistancing the Osaka Evessa 94-75 and 81-65.  The Saitama Broncos and the Toyama Grouses shared the weekend, with the Broncos winning by a single point, 82-81, in the first game.  The Grouses, led by Puerto Rico native Angel Garcia who poured in a game high 39 points, won 89-77 on Sunday at Tokorozawa Municipal Gymnasium.  The Grouses are 9-6 while the Broncos are 2-8.  The Shinshu Brave Warriors split a series with the Akita Northern Happinets, winning 72-68, before losing 75-68 to settle their record at 7-5.  Akita is now 8-2.