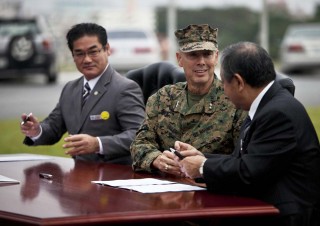 The city of Ginowan and Chatan Town have signed a pact with the U.S. military that allows local citizens to enter the Futenma Marine Corps Air Station and other U.S. military facilities for evacuation in the event of natural disasters.

The local implementation agreement allows residents of Ginowan City and Chatan Town access through Marine Corps Air Station Futenma and Camp Foster in the event of a natural disaster. Access is allowed to Marine Corps facilities as part of a coordinated joint response effort to ensure the safety of the surrounding communities.
During the ceremony Talleri said, “Today, we understand that our installation facilities and areas are far more than United States military enclaves. They are platforms for providing international humanitarian assistance and emergency relief.” 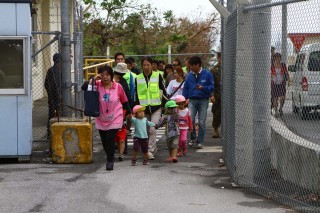 Following the ceremonies, an evacuation exercise was conducted in a coordinated effort between Camp Foster personnel and Chatan Town participants. The evacuation route utilized during the exercise is one of the designated routes agreed upon in the signing.  Talleri added, “You may be assured that the Marine Corps is committed to doing everything we can to be prepared to respond in the event of a natural disaster. Not only are we allies, but we are partners, friends, and neighbors. Identifying programs and solutions to issues of mutual interest is a sign of our strength and unity. This agreement serves to reinforce our commitment to cooperation.”

During the evacuation exercise approximately 75 residents of Chatan Town simulated the route through Camp Foster, reinforcing the importance of the agreement. In the unfortunate event of a natural disaster, residents would utilize evacuation routes to reach safe, high ground.

In Ginowan and Chatan, both located on the west coast of Okinawa’s main island, there have been concerns that residents near the coast may face difficulties evacuating to inland areas because of the U.S. military facilities. In 2007, the Japanese and U.S. governments agreed to allow Japanese citizens to enter U.S. military facilities in the nation in times of disasters. Based on the agreement, the Tokyo metropolitan government and the U.S. military concluded a pact in 2008 on citizens’ use of a heliport at the military’s Akasaka Press Center in Minato Ward for disaster evacuation.